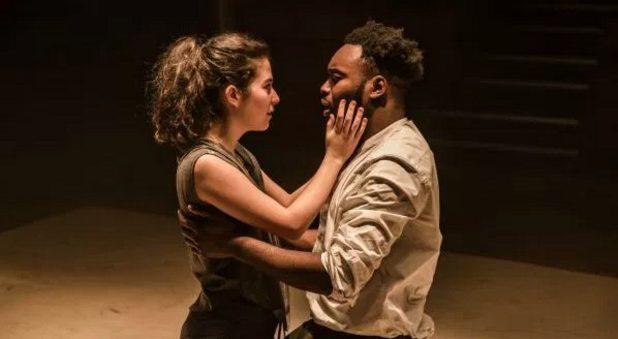 Shakespeare at the Tobacco Factory (SATTF)’s new version of Othello brings the Bard’s tragedy of malign manipulation and jealous, destructive rage right into the present-day. It’s immediately apparent that the entrenched racism, misogyny and religious intolerance of the 16th Century still resonates in a setting of mobiles, microphones and concrete basement strip lighting.

Abraham Popoola’s Othello is a Moor who has converted to Christianity in name only; he and Desdemona marry in a Muslim ceremony and only then does he stow away his prayer mat and take up his crucifix instead. This adds a new layer of complexity to his portrayal; bold, physically imposing, yet always an outsider striving to assimilate himself in Venetian society by paying it lip service. Othello’s gullibility in relying on Iago’s advice and falling for his web of falsehoods is at once more believable. Popoola, fresh from RADA, does well to capture these nuances in his performance, though his verse-speaking occasionally loses some clarity.

Overlooked for promotion in Othello’s ranks in favour of Cassio, Iago is the scheming central puppet-master out for revenge. Mark Lockyer plays him with convincing, restless energy; pacing, quick witted, malevolently delighting in his own capacity for invention, as he provokes Othello’s suspicions about his young wife’s faithfulness. Lockyer’s splinter of humour, exuding bonhomie as Iago strides the stage and addresses the audience, renders his pathological ruthlessness in plotting innocent deaths even more chilling.

The testosterone is palpable, much of it arising from the black-clad soldiers who display all the barely suppressed anger of Fascist bully boys, swearing and chanting in a pack. Against this is contrasted the welcome warmth of Desdemona’s purity; Norah Lopez Holden brings a freshness and vitality to the role as she turns from the giddy excitement of a new bride to bewilderment at Othello’s unwarranted jealousy. There’s profound feeling in her relationship with her husband and compelling camaraderie with Iago’s wife Emilia, vividly drawn by Katy Stephens.

Richard Twyman, artistic director of English Touring Theatre, retains all SATTF’s renowned clarity of storytelling and grasp of Shakespeare’s verse here, while introducing an underlying urgency and some memorable set pieces. The storm when sailing from Venice to Cyprus is strikingly invoked by the ensemble in sou’westers and rain capes, ranked under a central rectangle of down-lighters while thunder and lightning rages round. Othello takes out his frustration at Cassio’s supposed betrayal by practising his boxing skills on a leather punchbag suspended from the ceiling. It might not be the subtlest interpretation, but it’s effective against the backdrop of an otherwise empty stage.

Twyman’s Othello starkly demonstrates how easily the thin veneer of civilised society can be peeled away, once the seeds of divisiveness are sown. This is an intense and absorbing production with real depth, that signals the play’s continuing relevance in holding a brutal, unflinching mirror to contemporary society.

Posted by Claire Thinking at 12:25