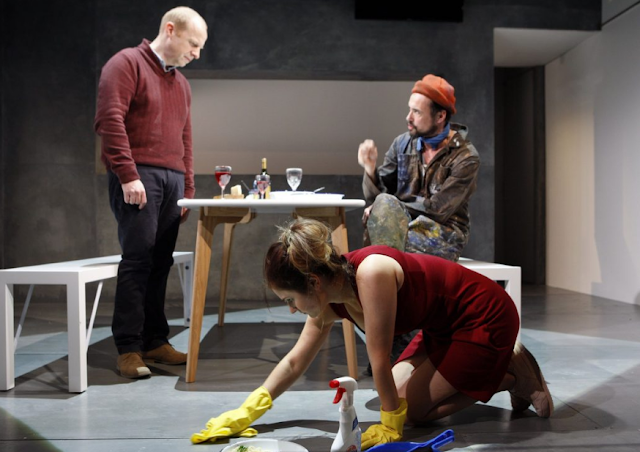 The ambition behind Marius von Mayenburg’s Plastic is dazzling: using the artifice of theatre, its shared space and storytelling communion, to question the boundaries between art and life. If you listen to the narrative of the play’s central character Serge Haulupa, conceptual artist and orchestrator of domestic mayhem, that is. The play has other, complex identities: the middle-class couple, striving to get to grips with everyday existence: the teenager facing the onslaught of puberty: and the cleaner whose role is pivotal, but often overlooked.

Michael and Ulrike are a married couple whose comfortable life is falling apart. He’s a doctor, looking for meaning in a wider context and she’s an artist and Haulupa’s personal assistant. Neither seems capable of coping with their teenage son, Vincent, preferring to buy in the services of Jessica, cleaner, housekeeper and general dogsbody, instead.

In the beginning, Jessica is an awkward presence; the couple argue over leaving money in their home where she might take it, bicker about her personal hygiene and patronise her abilities. Then Haulupa, deciding his next conceptual performance will centre around the contents of Michael and Ulrike’s fridge, discovers Jessica for himself. She becomes not only his muse, but also the reluctant confessor to the family’s most intimate revelations, who gives little of herself away.

Von Mayenburg’s writing is razor-sharp, acerbic and bleak, with Maja Zade’s translation from the German capturing its satire; darkly probing the disconnect between affluent contemporary lifestyles and the equally pretentious artistic values that undermine them. Steve John Shepherd as Haulupa is a relentless, restless presence; full of disruptive and outrageous creative self-absorption. Charlotte Randle and Jonathan Slinger as Ulrike and Michael bicker and deride each other with the suppressed fury of a couple on the brink of divorce; that there is still love left in their marriage when Michael announces his intention to work with Doctors Without Borders (‘but you’ve got borders all over the place!’ declares Ulrike) comes as a surprise. Ria Zmitrowicz is the unruffled, matter-of-fact Jessica with just the hint of an exterior life (‘I don’t imagine things when I’m at work’) and Brenock O’Connor is a suitably truculent but vulnerably pubescent Vincent.

Matthew Dunster’s direction is fast-paced and crisp, while Jean Chan’s set of minimalist hard edges is vividly brought to life by Richard Howell’s imposing lighting design. A TV screen suggests performance art installations as well as more mundane after-school programmes. There’s plenty to sink your teeth into, even if the much-anticipated food fight ends up being little more than a few strands of spaghetti slithering down a paint-splattered overall.

Von Mayenburg came to prominence in the UK in 2007 with The Ugly One at the Royal Court. Now this UK premiere underlines his talent and continues the Ustinov’s reputation, in its new German season, for unearthing European plays of rare quality. Plastic is a scintillating comedy of modern manners that circles within circles, questioning which is the greater artifice; one family’s self-image and lip-service to liberal ideals or the solipsistic superficiality of the artist. Food for thought, indeed.

Posted by Claire Thinking at 14:00