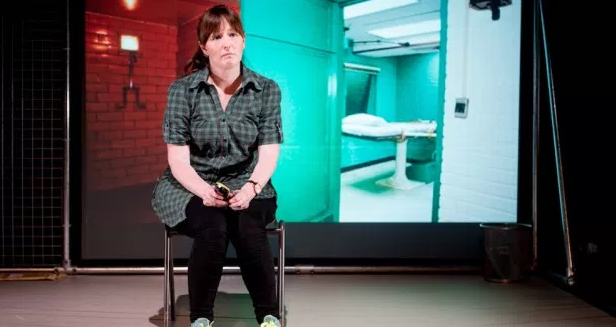 Men who kill and the women who love them, despite – or because of – their spending 15 years or more on death row. State-sanctioned homicide by lethal injection in the heart of small town Texas. It’s a huge subject to tackle in an hour long, one woman show; Stephanie Ridings, now touring after a successful 2016 Edinburgh Fringe, shapes it with a perspective that crosses the line between objective research and deeply personal involvement.

With imagery and video projected onto a large white screen behind her, Ridings engages the audience with her deceptively simple, open style. She quotes facts and figures about the men sentenced to death in America; frequently serial killers and rapists many times over. Yet, in representing the ‘ultimate alpha male’, these men are also strangely attractive to some women. On dedicated websites, they are befriended as pen pals; this is just what Ridings does, in the interests of researching her theatre piece.

She has a rocky relationship with her long-term partner Stompy – so called because of the way he moves around their house – an addiction to cat gifs and a gaping hole in her life. One that it seems a penfriend called Jonny might be able to fill. Never mind that he’s committed murder during a robbery; after an exchange of letters, suddenly Ridings is there in Huntsville with his sister. Combining tourist snaps with pictures of the apparatus of death, standing outside the walls of the prison, bearing witness to another man’s execution.

Ridings, it seems, becomes what she is investigating, taking on the morality she set out to question. Her relationship with Jonny grows increasingly surreal, while the much berated Stompy becomes the ever-patient voice of reason. How much is authentic and how much fabricated in the name of research? Sometimes difficult to unpick, it feels as though there are more ideas to explore here than Ridings knows what to do with. Her tone is often jovial, potentially desensitising the audience and filtering their reactions.

Ultimately, The Road to Huntsville is a quietly disturbing piece of theatre for incidental, unexpected reasons; questioning the boundaries in research conducted in a distant domestic setting, every bit as much as the legitimacy of capital punishment in a claustrophobic corner of a Texan prison.

Runs until Friday 17 March 2017 as part of a tour | Image: Graeme Braidwood

Posted by Claire Thinking at 15:00