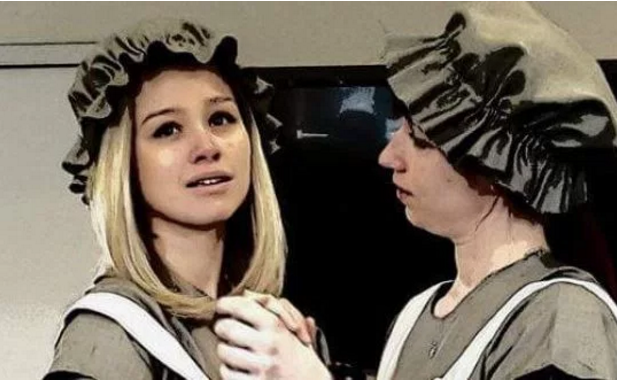 Here’s a shocking premise for a play; that women who don’t conform to convention should be shut away in an institution and left to decay. And yet, in early 20th Century Britain, this was too often their fate; from unmarried mothers to those who simply didn’t fit in, exclusion from society could be brutally sudden and final.

Airswimming by Charlotte Jones, the writer best known for Humble Boy and creating the ITV series The Halcyon, focuses on the lives of two compelling representatives of this injustice. Most productions of this 1997 play use just two actors to portray young Dora and Persephone and their older alter egos, Dorph and Porph. Here, Old Bag Theatre Company clearly delineates the younger and older characters by having four.

Dora, played by Phoebe Mulcahy, is mannish, down to earth and working class. She’s already a dab hand at polishing baths and staircases and treats these daily chores with all the precision of a military operation. She’s joined by a new recruit, Serena Dunlop’s Persephone, an upper-class debutante with no knowledge or aptitude for housework, certain she will soon be rescued by her family. Both are dressed in 1920s maids’ uniforms but their residence, rather than a grand old country house, is St Dymphna’s Hospital for the Criminally Insane.

It’s hard to reconcile these fresh-faced, still hopeful young women with their older counterparts Porph (Jane Lawson), larger than life with her facial tics and Doris Day wig and Dorph, ostensibly the voice of reason, played by Liz Hume with stoic calm and occasional shades of a Dawn French character.

With a simple set of a tin bath and a couple of stairs and the help of some of Doris Day’s greatest hits, this bleakly funny and poignant story shifts backwards and forwards in time to cover the 50 years of the women’s incarceration. All four actors are evenly matched and do justice to their unfolding relationship; as hope turns to despair, they comfort and cling to each other to survive. There are moments of madness, with the women’s grasp on reality beginning to slip away through extended isolation. There’s a deep vein of humour, mainly played out in Porph’s growing obsession with Doris Day and Dorph’s alternating exasperation and weary acceptance, as well as the moving, magical originality of the air swimming of the play’s title.

Directors Andy Cork and Emma Firman handle the subject matter and Jones’ sensitive writing with insight and compassion. Towards the end of the play, the downside of having two versions of each character on stage is that events are harder to follow as young and old converge. The intimacy of the stage begins to feel almost crowded and yet, despite this, it still works; emphasising the passage of years and adding another dimension to a story that, for all its cruel intolerance, ultimately celebrates the boundless capacity of the human spirit for friendship and survival.

Posted by Claire Thinking at 14:07