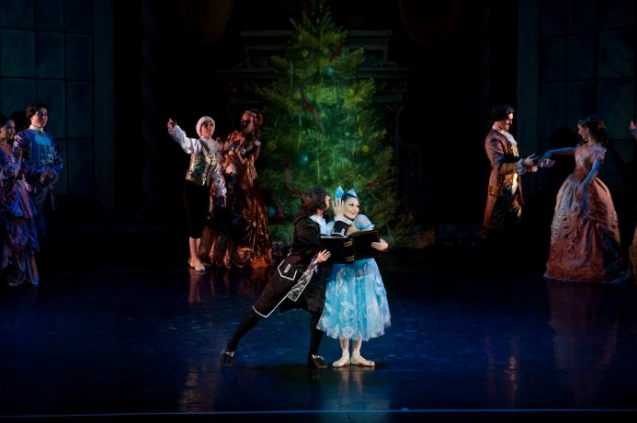 The wrapping may be a little old fashioned, but Saint Petersburg Classic Ballet’s presentation of The Nutcracker still offers a selection box of colourful treats for all ages.

This piece is performed in repertoire with Swan Lake – seen at the Theatre Royal earlier in the week – under the artistic direction of Marina Medvetskaya, with prima ballerina Natalia Romanova taking the lead in both productions.

Traditionally a festive ballet based on the short story by E T A Hoffmann, The Nutcracker was first performed in Saint Petersburg’s Mariinsky Theatre in 1892. It begins with a family Christmas party, where young Clara Stahlbaum is given a toy soldier nutcracker by her godfather, Dr Drosselmeyer. She is heartbroken when her brother Fritz breaks her gift, but delighted when the mysterious doctor mends it, just in time for her to hug it to sleep.

Saint Petersburg’s classic staging depicts an impressive ballroom with a towering Christmas tree, but is essentially a backcloth and series of painted flats that ultimately has the static, two-dimensional feel of a past era. In contrast, the dancers of the corps de ballet are like twinkling, festive baubles; full of light and life and resplendent in bright jewel-coloured costumes. Romanova, sparkling in sapphire blue, performs the role of Clara with fluent, graceful precision, while Dmitriy Popov is a darkly commanding Drosselmeyer.

If the events of the party take time to unfold in this strictly classical interpretation, then the battle that begins in Clara’s dreams, as she falls asleep afterwards, seems over far too quickly, without any great build-up of tension. Popov swaps roles to portray real menace as the Mouse King, but his army, though looking the part in sleek, charcoal grey costumes with glowering red eyes, appears timid and easily defeated by Yuliya Yashina’s Nutcracker soldier and his compatriots.

The transformation of Clara and the Nutcracker into a Princess and Prince (Vadim Lolenko) and their journey into a snowy land brings the first real moments of magic to this production; the Waltz of the Snowflakes, vivid in pristine white complete with falling snow, is mesmerising as it draws Act One to a close.

Another unfolding pleasure is the live performance by the Hungarian Sinfonietta orchestra under the baton of Vadim Perevoznikov. Although lacking power on occasion – perhaps due to acoustics – their interpretation of Tchaikovsky’s romantic and lyrical score is flawless throughout.

In the Second Act, celebrations in the Kingdom of Sweets bring Clara a series of delicacies; the Sugar Plum Fairy is also expressively danced by Romanova, while Fujise Kana, poised and sinuous in her Eastern dance, is exotic in luminous orange.

At times, the corps de ballet appears hemmed in by the size restrictions of the Theatre Royal’s stage, and the already tenuous narrative of The Nutcracker tends to be interrupted in Act Two by lengthy curtain calls after some of the dances.

Even if the storytelling – through adherence to the original – falters at times, Saint Petersburg Classic Ballet’s The Nutcracker still represents a perfect introduction to the elegance and accomplishment of Russian classical ballet for a new generation, while having plenty to offer those already familiar with this particular box of delights.

Posted by Claire Thinking at 13:53