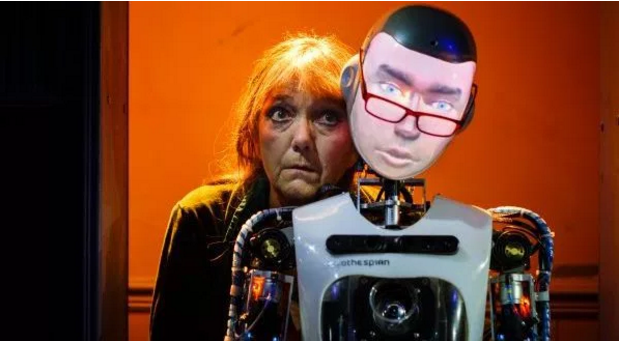 The full title of this 90-minute play from Pipeline Theatre is Spillikin, A Love Story. It combines the theme of an identity lost in the debilitating chasm of dementia with the technological innovation of an on-stage robot, becoming both substitute companion and treasurer of a lifetime’s experiences. What emerges is ultimately a very human story, a testament that what survives of us is love.

Sally’s husband Raymond is away at a conference, she thinks. He’s always away at a conference, despite his age and infirmity, because he’s an expert in robotics and artificial intelligence. She appears well-groomed and together, but looks can be deceptive. Her mind is fading fast and it seems that Raymond’s absence may be the permanent kind. What he’s left behind is an extraordinarily patient and reactive robot, filled with his memories of their first meeting and marriage; an offering of consolation extending beyond the grave.

Interspersed with Sally’s decline is the unlikely story of how she and Raymond first met in the 1970s and fell in love; she liked Blondie and he liked physics, but he had kind eyes and she loved the softness of his neck. Hannah Stephens as the bold, facetious younger Sally and Mike Tonkin Jones as shy, geeky young Raymond have great chemistry; they spark off each other and, despite their differences, under Jon Welch’s tightly choreographed direction, their mutual attraction is believable, hopeful and impulsive.

Judy Norman plays the older Sally with the bitterness and frustration of a woman whose mind is unravelling; alternately raging at her robot companion and treating him with the tenderness of renewal. Gradually losing her orientation, her hair becomes wilder, her clothing disordered, her vocabulary diminished. Through an evocative soundtrack, clever projection and symbolically emptying bookshelves, we realise Sally and Raymond’s long marriage was not always a happy one; childless and with shades of infidelity, yet a residual love endured.

The robot itself, a repository of older Raymond’s memories, remains almost infuriatingly calm throughout; played by a remarkable ‘Robothesbian’ designed by Will Jackson of Engineered Arts to mimic human movement. Seated and omnipresent, it assimilates Raymond’s personality and habits just as Sally is losing hers; exhibiting an eerily nuanced range of expression and movement, as well as the ability to sing along to My Funny Valentine. It may not be able to replace humans quite yet, but Spillikin raises intelligent questions about how developments in robotics could help, or indeed threaten, future generations, as our ageing population inevitably declines.

Several productions exploring human frailty and the devastating loss of identity in dementia sufferers have been staged at the Ustinov in recent seasons, including The Father and Half Life. Spillikin moves the debate forward by examining the role of technology; the strength of human bonds might prove impossible to replicate, but artificial intelligence could still provide comfort as well as functional support. The answers are far from clear-cut, but this riveting piece of theatre brings an insight and substance of its own.

Posted by Claire Thinking at 11:20