Schroder is the story of a German immigrant to America, who arrives in the Boston hinterlands as a young boy and attempts to assimilate as he grows up. Nothing too unusual about that, except Eric's reinvention goes much further than the norm; changing his surname to Kennedy, distancing himself from his taciturn East German father and successfully creating a whole new background for himself. It's only when his marriage to all-American Laura falls apart and he's left with strictly limited visiting rights to his six-year-old daughter Meadow, that his sense of self begins to unravel. 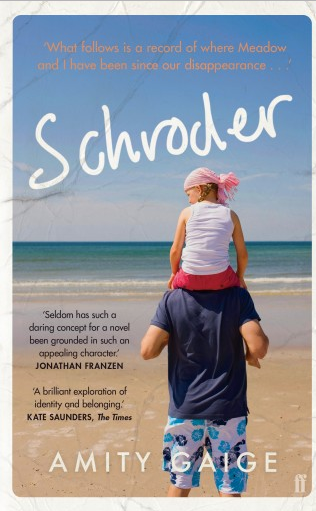 Eric takes his daughter on a road trip to Mount Washington, on an impulse that both of them share. Meadow is excited about spending more time with her father and skipping a few days of school. Eric promises he'll speak to her Mum and have her back home in a week. But along the way, priorities change and the adventure becomes a kidnap. As Eric documents the twists and turns of their increasingly desperate journey, we learn about his own elusive mother, the reasons behind his deception and his overwhelming love for his only child.

Eric's story takes the form of a confession to his estranged wife. He is the ultimate unreliable narrator and yet his moments of self-awareness are heartfelt and sensitively written. And his relationship with clever, inquisitive Meadow is well drawn, particularly in the descriptions of her endurance and willingness to forgive his questionable choices, because he is her Daddy. She has a child's perceptiveness and patience in dealing with his mounting delusion.

Yet, for all its plausible premise, effective structure and poignant prose, I found myself losing sympathy for Schroder towards the end. Eric's selfish and irresponsible self-pity begins to grate. He lacks insight into the failure of his relationship with his wife and it's hard for the reader to discern the truth between the lines. His research projects and footnotes suggested a pedantic, minutiae-loving character that doesn't seem to tally with the rest of the novel. I pondered whether this was throwback to his Germanic roots, yet crucially, the main body of writing feels so American, it might hardly have been written by an outsider at all.

I loved the sound of  this novel when I heard Amity Gaige discussing it at the Bath Literature Festival back in 2013. She's an articulate speaker and clearly a talented writer. If, by the end, it doesn't quite live up to my initial expectations, it's still an intriguing exploration of one man's unreconciled soul and his need for validation and identity.

Schroder by Amity Gaige is published in the UK in paperback by Faber & Faber.
Posted by Claire Thinking at 11:18