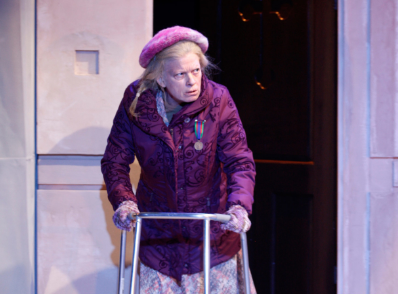 When memories fade, what is there left of us? John Mighton’s play examines issues of memory and identity; how reality blurs with age, the balance shifts and we become more diminished by what we have forgotten than defined by our recall of the past.

It’s a subject matter that reflects the themes of Florian Zeller’s The Father, which received its UK premiere in the Ustinov and went on to great acclaim. But Half Life, first seen in Toronto in 2005, contains the sweetness of new beginnings, too; love blossoming, in the sterility of a Canadian nursing home, between two elderly residents who may or may not have enjoyed a previous relationship.

Patrick and Clara meet over a game of hangman in the dayroom; Patrick was a wartime code-breaker and can still master such activities with ease. But Clara is more overtly fragile, her memories ephemeral, dissolving and reforming as she reaches out to grasp them. It seems they may have met before, gone dancing during the war. They develop a tender, protective relationship, childlike in its devotion, but then it is for their grown up children, Donald and Anna, to determine what their future should be.

Mighton writes with humour and empathy for the elderly couple; in a rapid succession of vignettes, Nancy Meckler’s direction always allows space for their dignity and relationship to develop. It is Donald and Anna, both divorced and grappling with the present, who are posed the greater challenge. Anna seems able to adapt to the idea of her father being happy in a new relationship but Donald, who worshipped his own recently deceased father, is more reluctant to permit his mother a life that might no longer encompass his own.

Helen Ryan is radiant and luminous in her portrayal of Clara, endlessly long-suffering and patient – truly an angel as she’s often described by her nurse. Patrick Godfrey as the irascible Patrick has fewer lines – and less room – to develop his character, but their relationship is entirely believable. Patricia Potter as Anna is at ease with herself and convincing in her support for her father’s new relationship. It is Ustinov regular Raymond Coulthard who has the most difficult task in communicating Donald’s distress at his loss and his mother’s new love, disguised in concern for her dementia-ridden vulnerability.

Janet Bird’s set is ingenious in its adaptable design, casting shadows and shifting perspectives to suggest both presence and absence. There are chairs that disorientate on the walls and ceilings, while the simple drawing of a hospital curtain is enough to change the focus of each scene. Mighton’s work throws up ideas aplenty, contrasting memory with the development of artificial intelligence, the endless variance of human life and death with mathematical constancy.

Yet, these ideas are not always carried to a satisfactory conclusion and ultimately, there is a sense of ambiguity; of questions unanswered and a gradual loss of momentum. Perhaps this – as in life itself – is the point. Still, in the confines of 90 minutes of theatre, there remains the uneasy sense of needing something more.

Posted by Claire Thinking at 12:25