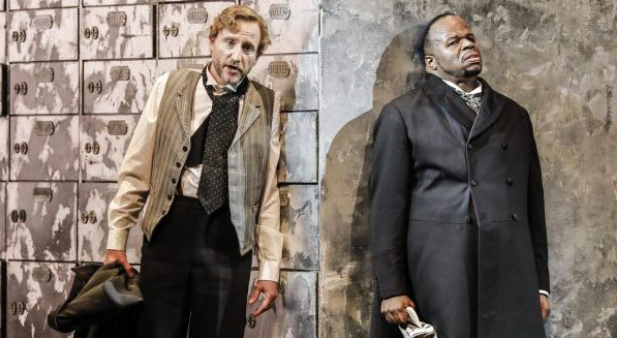 WNO’s English premiere of André Tchaikowsky’s opera The Merchant of Venice powerfully illuminates the story’s original themes of prejudice, tribalism and anti-Semitism. Keith Warner’s production, first performed at the Bregenz Festival in Austria in 2013, forms part of WNO’s 2016 Autumn season commemorating the 400th anniversary of Shakespeare’s death. In the starkest terms, it hammers home the play’s continuing relevance; that the seam of racial hatred, so embedded in Shakespeare’s portrayal of 16th Century Venice, can still all too easily be found running through the core of wider society today.

A Polish Jew and gifted musician who survived the Warsaw ghetto, André Tchaikowsky was unequivocally qualified to take on the challenge of translating Shakespeare’s problem play into an opera. Indeed, it became his life’s work, taking almost 25 years until his death in 1982 to complete. His score has echoes of Benjamin Britten and he wrote more and more of himself into it; that he was depressive is reflected in an opening scene with Antonio on the psychiatrist’s couch. Later, Tchaikowsky’s homosexuality underpins Antonio’s bond with Bassanio – driving him to secure his friend’s loan even by mortgaging his own flesh.

Despite, or more likely because of this, Tchaikowsky’s finished work is far from finely balanced; there’s an uneasy pendulum swing of styles between the dramatic tragedy of Act One as Shylock successfully agrees the terms of his loan to Antonio, only to discover his daughter has absconded with his money and jewels, and the Edwardian bathing costumes and cavorting light farce of the second act set in Portia’s Belmont. John O’Brien’s libretto lacks clarity on occasion, at its best when it closely reflects Shakespeare’s own words. The impact of the superbly heightened courtroom tension of Act Three – ‘Hath not a Jew eyes?’ – ebbs away during the baffling and over-long moonlit escapades of the Epilogue.

There are strong performances; Lester Lynch’s Shylock dominates the stage with his fluid baritone and imposing presence as he rails against Christian injustice and demands his pound of flesh. Sarah Castle’s Portia transforms from frustrated, frivolous heiress into an impressive courtroom doctor of law, where her mezzo really hits home. Mark Le Brocq convinces throughout as Bassanio, the conflict of lover and friend etched onto his face, but his rich tones often, unfortunately, overpower the weaker countertenor of Martin Wölfel’s Antonio.

Ashley Martin-Davis’ set, constructed around two towering walls of safety deposit boxes, is strikingly effective, and the WNO orchestra is elegantly conducted by Lionel Friend. For all the importance of the themes of Tchaikowsky’s opera, it feels like a curate’s egg of a work; while there’s much to admire in its discourse on the ugly, destructive forces of prejudice, this is too often deflected by a distracting lack of clarity and consistency in musical and narrative drive.

Posted by Claire Thinking at 13:47

Email ThisBlogThis!Share to TwitterShare to FacebookShare to Pinterest
Labels: Bristol Hippodome, The Merchant of Venice, WNO