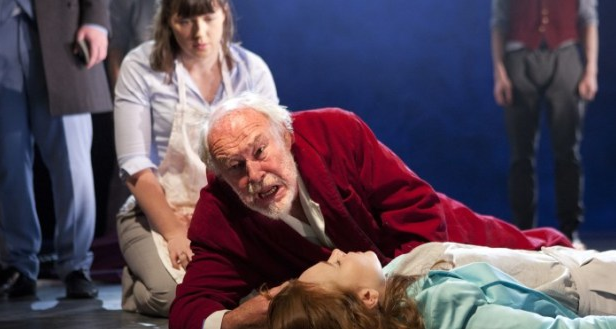 There may have been a glut of King Lears already in Shakespeare’s 400th anniversary year, but never has one felt more apposite in its post-Brexit timing than this production from Bristol Old Vic. Timothy West takes on the role of a leader brought down and driven mad by his own actions, bequeathing to the younger generation a country split asunder and riven by fault lines of hatred.

In his collaboration with Bristol Old Vic Theatre School, Tom Morris’ casting of the majority of roles with its students brings out a strong sense of youthful energy. It’s an effective counterpoint to Timothy West’s Lear, resigned and world-weary from the start, foreshadowing what is to come rather than emphasising the heightened tragedy of a monarch’s loss of absolute power.

West’s performance, after a slightly shaky start, is thoughtful and nuanced; there’s a rare moment of rage as Lear slashes at a huge projected map of his newly divided kingdom. More often, he contains and hints at inner turmoil, the occasional flashes of the charismatic tyrant beneath all the more striking. He’s at his most touching in the final scenes as, with renewed clarity, he recognises the enduring strength of Poppy Pedder’s loyal Cordelia.

Stephanie Cole is endearing and winsome as the far-sighted and aged Fool; part guardian angel, part comedian in knitted coxcomb hat. She alone recognises what will come of the schism as David Hargreaves’ increasingly frantic Gloucester is deceived and betrayed by Alex York as the scheming Edmund. Goneril and Regan (Jessica Temple and Michelle Fox) are glib-tongued and unflinching in their pursuit of power, while Tom Byrne masters his various incarnations as the wronged son Edgar and Danann McAleer is memorable and enduring in his portrayal of Kent.

The Theatre School students have been involved in all aspects of production; Anna Orton’s set design presents an effectively oversized, dark and forbiddingly masculine kingdom, if occasionally unwieldy for actors to manoeuvre. Aldo Vazquez Yela’s contemporary costuming, though sometimes puzzling, is full of colour and interest, while the storm is a highlight of lighting and sound by Rob Casey and Dave Price in an otherwise pared-back treatment. But, in the background, the chorus is more often a distraction than an enhancement; there are ideas and imagination aplenty but they lack a certain cohesion.

In case we ever doubted it, so many of Shakespeare’s lines emphasise his enduring relevance; as Lear in their bittersweet reunion tells a blinded Gloucester ‘get thee glass eyes, and like a scurvy politician seem to see the things thou dost not’, it draws a rueful laugh of recognition from the audience. There may be unevenness in this King Lear, with some moments feeling underpowered, but there’s plenty of promise from a new generation, here well supported by its seniors.

Posted by Claire Thinking at 12:12