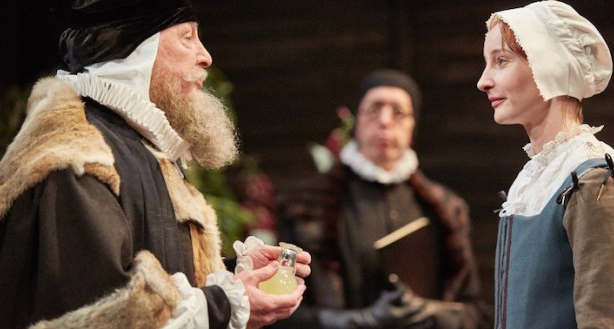 As contemporary headlines scream for transparency and the gap between public and private is narrowed, the themes of Peter Whelan’s 1996 play The Herbal Bed seem more relevant than ever.

In 1613, James I has been on the throne for ten years. Post-Reformation England is full of social upheaval, as the Puritan movement challenges the Church of England’s more traditional Protestantism. Shakespeare’s daughter Susanna is married to John Hall, a respected physician and Puritan sympathiser – but he appears more devoted to his work and herbal remedies than to his wife. She seeks solace in her relationship with local tradesman Rafe Smith, himself trapped in an unhappy marriage, only to find her morality and sexual health questioned by her husband’s disaffected apprentice, Jack Lane.

Based on real events over a summer in Stratford-upon-Avon, Whelan’s historical speculation weaves a tumultuous tale as Susanna challenges Lane for defamation in the ecclesiastical court. James Dacre’s production for English Touring Theatre, Royal & Derngate and Rose Theatre is finely nuanced; in upholding her family’s reputation and her husband’s God-given duty to go on saving lives, Susanna constructs a public mask of half-truths and omissions and proves herself to be as good a dissembler as her father.

Emma Lowndes is upright and virtuous as Susanna; it helps her case in court that she is easier to believe in as a respectable wife and helper to her husband, than as a passionate woman with a colourful past and current lover in all but technicality. Yet, in her relationship with Smith (Philip Correia), she seeks much more than simple romance; questing after the poetically transformative power of love as alchemy. Charlotte Wakefield as the family servant and Matt Whitchurch as the feckless Lane provide many of the lighter moments, in welcome contrast to Michael Mears’ chilling portrayal of the Bishop of Worcester’s tenacious and unforgiving Vicar-General, Barnabus Goche.

This carefully-balanced revival of a play originally produced to great acclaim by the RSC, avoids the temptation to descend into hand-wringing melodrama and gradually reels you in. The fulcrum comes in the gripping penultimate court scene in the cathedral, ethereally lit from a high window by Malcolm Rippeth in Jonathan Fensom’s stunning set design. In Goche’s examination of souls as well as deeds, The Herbal Bed foreshadows the firestorm of witch trials depicted in The Crucible or Rebecca Lenkiewicz’s recent Jane Wenham: The Witch of Walkern. None are spared as the Hall household falls under forensic scrutiny and their lives turn on a willingness to find a form of compromise in words.

Thoughtful and multi-faceted, this production skilfully exposes the universality of Whelan’s themes. It invites its audience to reflect on that starkest of choices; between uncovering the depths of a soul’s hidden desires at all costs and accommodating a collaborative version of reality that might ultimately reflect a greater truth.

Posted by Claire Thinking at 12:28