Book Review: The Evolution of Fear by Paul E. Hardisty

Faster than a speeding bullet - and there's never any shortage of those - The Evolution of Fear picks up Claymore Straker's story where it left him at the end of The Abrupt Physics of Dying; in the Cornish cottage that has become his enforced hideaway. 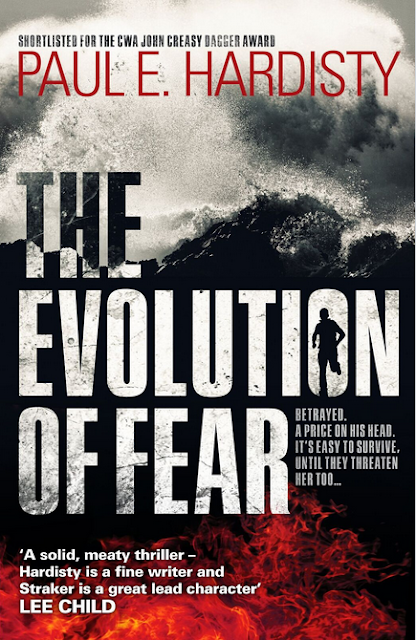 October 1994 and he's been holed up there for eight-and-a-half weeks - and now there's a price on his head. Hit-men are closing in and Clay's not the only one they're after. The murder of his best friend and the bloody threat the killers left behind convince him that Rania, the woman he loves, is also in mortal danger.

So begins Paul E.Hardisty's sequel to his CWA Creasy New Blood Dagger award short-listed debut.You need your wits about you to keep up with the twists and turns of Clay's blood-soaked misadventures; in Hardisty's writing, there's rarely any let up in tension or pace. Battle-weary and damaged both physically and psychologically, Clay flees his sanctuary and struggles to Istanbul via Spain, finding Rania only to lose her again, as she pursues a journalistic story of ecological devastation and murderous land-grab on the divided island of Cyprus.

The Evolution of Fear is more than a simple page-turner. From a storm off the westernmost coast of France to fire in an old farmhouse, Clay must face up to the most terrifying elemental forces and fight his way through them. Some of his biggest battles are internal, the mental scars left by his part in an Angolan massacre resurfacing to haunt both his dreams and waking hours:


Eleven years ago, he'd put the piece of bloodied skull into his pocket, checked his R4 and, crouching low, started out across the grass towards the white church, the crack of rifle fire coming from the treeline, the mechanical hum of de Koch's MAG loosing off burst after burst, AK47s banging in response, the air above him alive with metal. And afterwards, standing there in the smouldering ash of the village, the bodies of the Himba women and children and the old bushmen scattered about like discarded toys, they had agreed, all of them, never to speak of it again.


In the eye of the storm, Clay's inner turmoil seems Lear-like, but it's a copy of Macbeth he carries with him; external manifestation of the damage mined by past actions into the depths of his soul. His moments of reflection, between adrenaline-fuelled gun-fights with the agents of a Russian oligarch, find him longing for a way back from the abyss; a forgiveness of misdeeds that will allow him to love Rania as she deserves.

Clay's ex-commander and compatriot, the aptly nicknamed Crowbar, becomes a much bigger player in this  sequel, his motives far from clear; has he betrayed Clay and sold out to the highest bidder? And, alongside Rania in exposing these hard men's softer underbelly, is scientist Doctor Hope Bachmann, a one-woman defender of Cyprus' endangered turtle population. More than a token presence, these women (while admittedly still managing to appear annoyingly attractive even under great duress) are integral to the plot and their personal relationships weave yet another layer of complexity into its tangled web.

The body count in The Evolution of Fear  - as well as the sheer volume of weaponry - may be higher than I'm usually comfortable with, but it doesn't feel gratuitous because of the clear consequences of violence. Nor, on its own, is violence ever enough.

Despite its panoramic scope - personal, political and cultural -  this worthy sequel to Hardisty's gripping debut is never a difficult read. If one or two plot twists are signalled, many more are side-swipingly unexpected. Building on the strengths of The Abrupt Physics of Dying, it hooks you in from the start and challenges you to try putting it down before - breathless and exhausted - you reach its shocking and satisfying conclusion.


The Evolution of Fear by Paul E. Hardisty was published in the UK on 5th May 2016. Many thanks to Karen at Orenda Books for my review copy.
Posted by Claire Thinking at 07:48