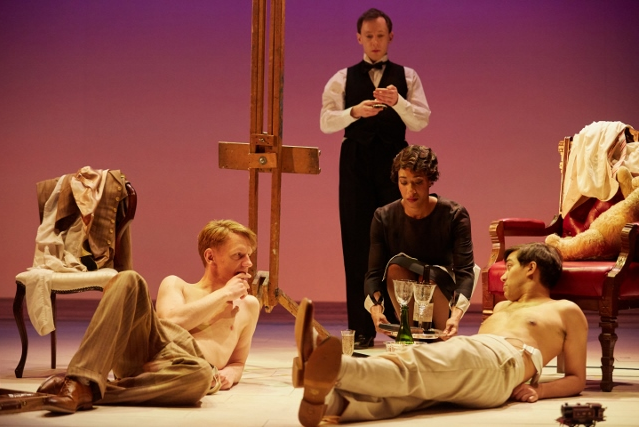 Evelyn Waugh’s captivating novel of the privileged but doomed Flyte family, as retold through the memories of Captain Charles Ryder, is given a bold and striking pared-back treatment in English Touring Theatre’s new production. It promises much, yet doesn’t quite deliver to that promise.

Set in that glittering, lost era between the two World Wars, Brideshead Revisited has already been famously adapted for film and television, with the 1981 Granada TV version casting a particularly long shadow. Castle Howard has remained widely regarded as the original Brideshead ever since, especially as Waugh himself apparently visited the formidable stately home in 1937.

This ETT production, in association with York Theatre Royal, sensibly doesn’t attempt to recreate the grandeur of that setting. Instead, looking out into the auditorium as he revisits Brideshead during the Second World War, Charles Ryder (Brian Ferguson) compels us to imagine it for ourselves. On stage is a brightly-coloured back projection of light – blue, red or green in different scenes – shaped into larger or smaller rectangles by the cast shifting black panels in front of it. In this way we are in an Oxford quad, the chapel at Brideshead, a storm at sea or an art gallery. It’s an imaginative and simple interpretation from director Damian Cruden, but not enough on its own to sustain the story.

The cast are fluid in their scene setting and multi-roling, only hampered at intervals by having to position a microphone to highlight important exchanges; an attempt to introduce an amplified, dream-like quality at key points that ends up being a distraction.

Brian Ferguson is a clear narrator who ably carries the piece, while not always succeeding at switching instantly into the role of Charles in the scenes he’s describing, particularly as his younger self. Christopher Simpson is a sweetly conflicted Sebastian and yet the chemistry between the two is lacking. Their relationship seems to both flourish and falter too quickly – the story too compressed in a two-hour sitting for this to be satisfactorily developed.

Shuna Snow mops up all the best character roles of Bridey Flyte, Rex Mottram and Kurt – they may be caricatures but then that’s predominantly how they appear in the book. Rosie Hilal is spirited and touching as Julia – seeming to grow and mature before our eyes – and produces a performance that induces empathy for her plight.

Yet, overall that’s the flaw here. While there’s plenty to admire in Sara Perks’ stage design, the clarity of storytelling and the movement of the cast, it never really makes us feel enough. The eloquent tone and beauty of Waugh’s prose remains elusive, as does the novel’s latent humour and youthful sensuality. And, as these elements don’t quite coalesce, its themes of philosophical conflict and loss are obscured, leaving a sense that this production – while innovative and interesting – could be so much more.

Posted by Claire Thinking at 19:51