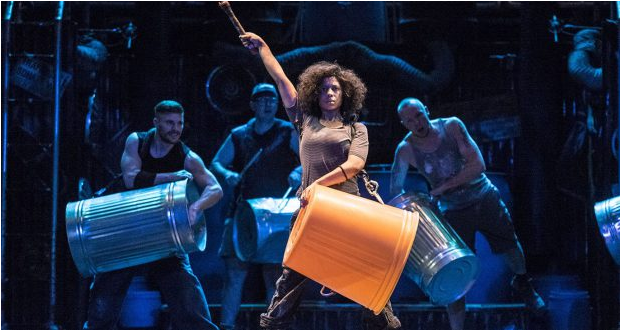 It’s an incredible 25 years since Stomp was first seen at London’s Bloomsbury Theatre, born out of the street comedy musicals created by Luke Cresswell and Steve McNicholas for the Edinburgh Fringe.

Since then, it’s become an international phenomenon; a celebration of the percussive possibilities of everyday household objects that has entertained over 15 million people worldwide. But, as the world has changed out of all recognition since 1991, so it might be difficult to imagine how a show that previewed in the last millennium – a commercial juggernaut that has taken up residence in both the West End and New York – can maintain its relevance for a contemporary audience.

That Stomp still achieves this is due to its language of rhythm, dance and comedy that plays out with barely a word being spoken. So universal is its reach, so exhilaratingly infectious its energy, that it doesn’t really matter if you sort of know what to expect. The swishing brooms are here, as are the iconic dustbin lids, topping and tailing the show. Saucepans, paint cans, kitchen sinks, supermarket trolleys, sections of rubber hose and even rustling paper bags all become instruments that add to the layers created in Mike Roberts’ intricate sound design.

Sandwiched in between is inventive new material and contrasting moments of quiet with synchronised Zippo lighters, as well as plenty of audience interaction and laughter that batters down the fourth wall. In a show that runs for an uninterrupted 100 minutes, you seldom feel the lack of an interval as it builds towards its conclusion.

The eight performers – six men and two women in this touring company – make it all look effortless, belying the complexity of their dazzlingly quicksilver and quirkily inventive routines. While always part of a team, their personalities – ranging from put-upon to devil-may-care maverick – are also given the chance to shine through with individual moments in the spotlight.

It’s possible to be a bit nit-picky; the show’s tight choreography detracts from a feeling of organic growth rising up from the streets. Its visual humour, though always well-timed and accessible, can occasionally descend into laddishness. Puzzlingly, the higher tier of the impressive industrially-landscaped set – stunning when in use – is ignored for whole sections of the performance.

It may lack some of the cutting edge it possessed when first unveiled, but Stomp has successfully traversed the decades from fringe festival to London’s 2012 Olympic closing ceremony. Undoubtedly, it’s still a vibrantly failsafe crowd-pleaser; a life-affirming party for all ages that is sure to bring a little more rhythm to your step next time you put out the bins.

Posted by Claire Thinking at 19:18