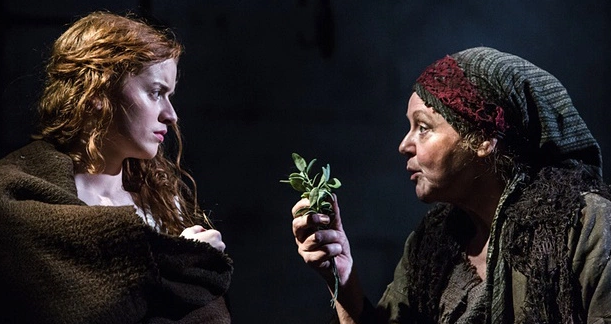 A play that opens in the aftermath of a hanging, Out of Joint’s Jane Wenham: The Witch of Walkern makes a grab for the dramatic jugular. Rebecca Lenkiewicz examines a Hertfordshire village at the beginning of the 18th Century; a time when the full frenzy of witch hunts may have passed their peak, yet rumours of sorcery are still woven into the fabric of a closed and superstitious society, with those accused all too easily damned when events go awry.

Ann Thorn’s mother, Eleanor, has just been executed for witchcraft. A noose hanging from a cruciform gibbet remains centre stage throughout the play, an ever-present reminder of the dead and a warning to the living. Young Ann is unhinged by events but also ready to make her own fresh assault on convention, when Jane Wenham, a woman existing at the edges of respectability, steps in as her protector. Yet, already Wenham’s detractors are baying for her blood. She sleeps for warmth with her cockerel, dances in the woods and has an all-consuming interest in herbs and potions. When tragedy strikes, it’s enough for her to be accused of witchcraft; in a place where outsiders are viewed with suspicion, she is unmarried, unnatural, old; a charge upon the parish.

Lenkiewicz skilfully exposes the human flaws of Walkern’s inhabitants; there are many all too ready to accuse Jane as a way of deflecting the guilt in their own hearts, only a few whose stumbling from the path of righteousness gives them a greater tolerance and empathy for others. The local cleric Francis Hutchinson refuses to believe in Wenham’s guilt, as do his housekeeper and former slave Kemi Martha and the publican Widow Higgins. But their voices are drowned out in the hue and cry led by Samuel Crane, the recently arrived minister sent to keep an eye on Hutchinson’s lack of orthodoxy, who finds ready support for his certainty of Wenham’s guilt.

The strong cast often takes on more than one role to present a mirror image; David Acton convinces both as the flawed but humane Hutchinson and also the belligerent villager Saul Paterson. Rachel Sanders extols tolerance as the feisty Widow Higgins but is baying for Jane’s blood as the grief-stricken Bridget Hurst. In a refreshingly predominantly female cast, there are also standout performances from Amanda Bellamy as the determined and stoical Wenham, dignified in the face of the most lowering of assaults, Tim Delap as the righteous but inwardly desperate Crane, and Hannah Hutch as the wild and grief-stricken Ann.

Strikingly staged and lit by James Button and Richard Howell, with eerie sound design by Max Pappenheim and haunting song from Cat Simmons as Kemi Martha, Ria Parry’s direction is full of bone-chilling potency from the start. Yet, the clarity of plot occasionally suffers for this and the intensity is dissipated by a few scenes running on for too long in the first half. After the interval, however, the tension builds anew; Jane’s harrowing encounter with the witch-identifier chillingly known as the Pricker will linger long in the memory although the resolution of her plight is then almost underplayed and rather too neat.

With Arthur Miller’s The Crucible currently across town at the Old Vic, this is a second, no less absorbing, Bristol look at the destructive forces of intolerance. Pinned in the form of witchcraft to a specific time and place, Jane Wenham: The Witch of Walkern nevertheless has an enduring resonance and also echoes the themes of Jim Crace’s timeless Man Booker shortlisted novel, Harvest. The play’s exploration of grief, loss, identity, religion, sexuality and truth-bending hysteria is often unremittingly stark, sometimes unexpectedly funny, but never less than stimulating.

Posted by Claire Thinking at 16:22