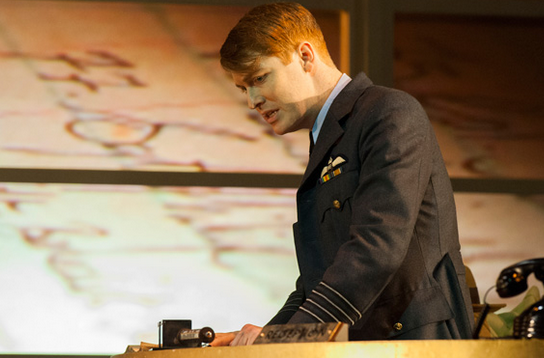 With so many characters at the extremes of emotion, opera might reasonably lay claim to madness as a pre-requisite. Yet, while there could be no shortage of suitable candidates for Welsh National Opera’s 2015 Madness season, Handel’s frequently overlooked Orlando, originally performed in London in 1733, still fits the bill very nicely.

WNO’s production, first staged by Scottish Opera in 2011, updates the original mountainside setting to a hospital ward during World War Two. Zoroastro is now a psychiatrist rather than a magician, while Orlando, the warrior driven to insanity through doomed love, becomes a heroic but traumatised RAF pilot. It’s a transformation from director Harry Fehr that correlates well with the plot most of the time, although the stark staging does rob the story of much of its mysticism.

The individual performances are superb; Lawrence Zazzo is masterful as the conflicted Orlando, his counter-tenor soaring full of anguish as his emotions plummet from rage to despair to the final torment of madness. Torn between the duty to fight for his country – demonstrated to him in a slide show of abdication and Nazi imagery by Daniel Grice’s commanding Zoroastro – and love for the wealthy American socialite Angelica, he storms around the stage, creating consternation and dismay while maintaining exquisite control in his vocal delivery.

Rebecca Evans as Angelica is no less impressive at portraying the tender desire of her love for Medoro in rich tones, combined with fear and preparation for flight once Orlando realises she loves another. And Fflur Wyn as Dorinda – now a nurse in a crisp, starched uniform – who also loves Medoro, provides a wonderful visual contrast while more than holding her own with her pure and plaintive precision. The trio Consolati o Bella, where Angelica combines with James Laing’s compassionate Medoro to console Dorinda that one day she too will find love, is a sublime ending to Act One.

The orchestra, conducted by Rinaldo Alessandrini, performs Handel’s soulfully beautiful score with such distinction that it’s tempting at times to simply close your eyes and just listen – especially as the action on stage, despite Fehr’s best endeavours, sometimes becomes a little static. Handel’s arias – each one spell-binding but repetitive in style and sentiment – have a tendency not to deliver much in the way of plot advancement. This is mitigated by projections onto Yannis Thavoris’ simple revolving set, reflecting Orlando’s increasingly delusional state of mind, and dramatic devices such as his rampage with a cut-throat razor and disturbing electroconvulsive therapy. There is still an undue amount of dressing and undressing, tea dispensing and bed-making needed, however, to pad out the action over three acts.

Yet, despite these reservations about Handel’s pacing, this is a production still well worth seeking out for the tenderness and beauty of its music, interpreted with great sympathy by an outstanding cast; a turbulent and often moving exploration of the madness of love.

Posted by Claire Thinking at 15:43