Opera Review: The Tales of Hoffmann at the Theatre Royal Bath 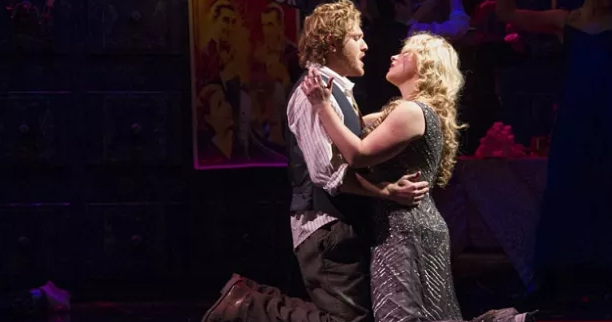 Jacques Offenbach’s darkly fantastical The Tales of Hoffmann has had many incarnations since its first public performance in 1881. Now English Touring Opera’s new production, sung in English with surtitles, sets it in the 1920s world of early cinema; the eponymous protagonist transforming from a poet into a silent movie-maker well past his prime, poring obsessively over his work.

Based on three short stories by the German romantic E T A Hoffmann, the opera is well suited to this updating – at the outset, at least. Played with great conviction by tenor Sam Furness, the fictionalised Hoffmann’s passion for his current love, Stella, together with the interference of the devilish Lindorf, disrupts his creativity and hastens his spiral through an alcoholic maelstrom into the wasteland where madness beckons. Furness’ rich tones and natural stage presence mark him out as a rising star from the beginning; egged on by his boisterous friends, Hoffmann tells the story of his three great loves and the macabre threats that destroyed each one in turn.

It’s in these episodes that the movie-making relevance seems to lose its way, with Hoffmann still referred to as ‘the poet’ and some uneasy directorial choices being made by James Bonas. Louise Mott as Hoffmann’s muse transforms without real explanation into the guise of a padded-out schoolboy as his companion, Nicklausse. Hoffmann’s first love, the automaton Olympia, takes the form of a loose-limbed pink neon puppet propelled around the stage by other cast members. In the gothic surroundings of a physics lab staffed by wild-haired scientists, War Horse it isn’t, although so bizarre a creature does effectively demonstrate Hoffmann’s hallucinatory hell and the spell he must be under – much more than the magic glasses sold to him by Coppelius would be needed to make him fall for her.

At least Olympia’s singing is effortlessly beautiful; ETO favourite Ilona Domnich’s soprano soars above the surreal setting as she fills the puppet’s blankness with divine purity. But it is in the second story, after the interval, that Domnich really comes into her own, bringing lustrous passion as the consumptive Antonia, for whom the compulsion to sing is stronger than life itself. The production settles into a more conventional retelling of Hoffmann’s woes and Domnich’s characterisation carries through into the final tale of the courtesan Giulietta and the licentious depravity of Venice.

The opera’s best-known Venetian Barcarolle is surprisingly underplayed, and at times the scaled-down orchestra sounds a little thin for the grandeur of the music. The staging is simple and effective for touring, though; a panelled surround clambered over by the cast, with hatches opening to reveal spectral visions and uninvited comments from beyond the grave, transforming from film set to science lab, Munich household to Venetian palazzo with a few slick changes.

In each setting, Warwick Fyfe brings a potency to his role as Hoffmann’s nemesis; as the sinister Lindorf he scuttles across the stage on two sticks with arachnid-like malevolence, while equally at home recreating the other villains in Hoffmann’s demise, especially the vampiric Dr Miracle. Matt R J Ward provides the comedic highlight of the evening in his cameo as Frantz, the family servant in Antonia’s household who creates unintended havoc through his deafness and sings endearingly of what might have been.

This may not always be a full-throttle production, yet ETO’s The Tales of Hoffmann does reveal glimpses of greatness in the performances of its leads, strong visual imagery and the core of a good idea in the updating of its premise – if only this could be clearly carried through in the storytelling.

Posted by Claire Thinking at 18:41