This review was first written for Theatre Bristol 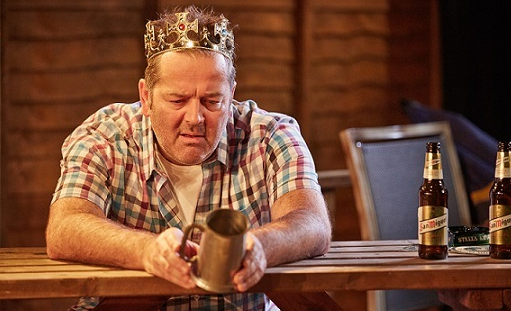 The prosaic setting of a pub garden in the heart of the Hampshire countryside – a place where smokers gather to nurse their addiction – becomes the confessional at the centre of Barney Norris’ new play Eventide.

From the beginning, the play’s three characters are intricately observed; under Alice Hamilton’s direction you can feel the weight of every facial tic and reaction. John, played by James Doherty, is the larger-than-life landlord of the establishment, ever ready with a joke about a ferret and a blow job. Hasan Dixon’s Mark is a young man scratching a living from whatever manual labouring he can find; work is scarce and, no matter what his troubles, he has to pay the rent. And Ellie Piercy’s eager, diffident Liz travels for miles to play the local church organ because there aren’t that many left and – by her own candid admission – she’s really not very good.

Not much happens; events in this play take place elsewhere. Here, on the decking of the beer garden, between the bin for the empties and the hosepipe, all we see is their aftermath. Yet, there is so much going on. It’s quickly evident that John, Mark and Liz are all, for different reasons, reeling from an individual sense of loss. The slow-building poignancy of this character-based piece is the way in which each of their tragedies gradually unfurls. The skin is stripped back until we reach the bone. Norris’ writing is subtle, layered, incisive, full of witty one-liners – and all the more devastating for that.

Norris gets the performances he deserves from a talented cast, so warmly natural and believable in their chatter that you feel tempted for a moment to leave your seat and join them. On these wooden benches, connections are made through easy banter but long-held desires dashed by a moment’s heedless line; a mistaken recollection can wound to the core and what is really meant stays lurking in the gaps between the words.

After the interval, a year has passed and although it seems there is now cause for celebration, this could be an illusion. The pub may be hosting a wedding party, but it’s been taken over by a chain. The villagers’ way of life is being eroded and not everyone finds it so easy to move on.

Like Bea Roberts’ And Then Come the Nightjars that played recently at Bristol Old Vic, Norris follows his award-winning debut Visitors by framing isolation and loneliness in a rural setting with finely drawn characterisation. In doing this, he finds a humanity common to us all; a place amid the hopelessness where there’s still a ray of hope.