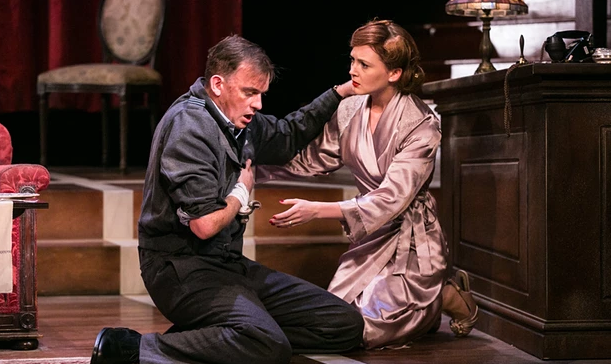 Terence Rattigan’s resurgence as a frequently performed playwright continues with this brand new touring revival of Flare Path from the Original Theatre Company and Birdsong Productions.
Rattigan fell out of favour in the latter decades of the 20th Century, overtaken by a post-war generation of angry young men creating kitchen sink dramas. Yet his understated lines, full of the suppressed emotions of those dealing with the trauma and aftermath of the Second World War, have in recent years swung back into fashion.
One of his most autobiographical works, Flare Path is based on Rattigan’s own experience as a tail-gunner, and deeply affected its audiences when first staged in 1942. It tells the story of Patricia, a former actress now married to RAF pilot Teddy Graham but caught up in an affair with her earlier lover, Hollywood film star Peter Kyle. Taking place over a single night when the airmen are called away on a raid, the play becomes a microcosm of the valour and sacrifice of war.
Patricia’s dilemma is intensified when Peter turns up unexpectedly; even more desperate to talk to Teddy, his latest mission means her news for him must wait. Indeed, all the wives gathering in the lounge of a Lincolnshire hotel can do nothing but put their lives on hold one way or another as their husbands take to the perilous skies. With the noise of planes overhead and the lights of the flare path guiding them, Peter’s woes by contrast seem pitifully small. His studio is about to drop him for being too old now he’s turned 40 while many a young pilot fighting for the survival of his country will never live to see that age.
If at first the assembling cast seems a little static, sometimes lacking the aura of a screen idol in its midst, Justin Audibert’s direction does pick up the pace and succeed in bringing out the conflict between duty and desire. Strong central performances include Olivia Hallinan, who encapsulates the spirit of the 1940s in her delivery of a glamorous but torn Patricia, and Alastair Whatley as Teddy, the plucky Captain whose banter masks a thousand fears.
In Hayley Grindle’s traditional, richly textured country hotel setting – overlaid with the lines of Alex Wardle’s cleverly lit flare path – their scenes together in the second act are especially moving. Teddy’s confession of his inner terrors has a heart-breaking, authentic quality, setting up a convincing turning-point in the play. Also enjoyable are Siobhan O’Kelly as Doris, the barmaid turned Polish countess and Philip Franks as warm-hearted Squadron Leader “Gloria” Swanson.
While Mrs Henderson Presents only recently demonstrated a patriotic show-must-go-on defiance to Bath audiences, Flare Path peels away the layers of wartime bravado to reveal the emotional devastation and personal vulnerability beneath. This is a production steeped in the stiff upper lip courage of a particular generation, with Rattigan’s finely crafted lines reminding us of the sacrifices made, not only by those who flew, but also those forced to wait behind.
Reviewed at Theatre Royal, Bath on 7 September 2015 as part of a UK tour | Photo: Jack Ladenburg