I originally reviewed Emma Hooper's enchanting debut Etta and Otto and Russell and James here back in February. To celebrate its recent publication in paperback, I'm really thrilled to be able to share below a playlist specially prepared by Emma to accompany the novel. 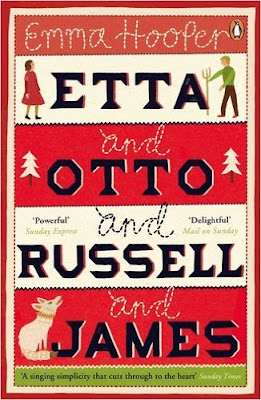 Etta is eighty-two years old and has never seen the sea. One morning she gets up early and packs her bag, intending to walk to the coast. Her memory is fading and to her husband Otto she writes:


I will try to remember to come back

Etta lives in Saskatchewan. Going westwards, the water is over three thousand kilometres away. She carries her name as a reminder written on a piece of paper and, as she walks, begins stepping back into the past. We learn of her childhood in the city with her only sister Alma, and Otto's contrasting life in rolling acres of dusty farmland with his fourteen brothers and sisters and school friends like Russell and Owen.

As Etta walks, Otto waits at home, working his way through the recipe cards she's left him. He makes cinnamon buns, date squares when he can't sleep and Saskatoon berry pie. He adopts a guinea pig and writes to Etta even though she won't receive his letters.

Russell, who still lives on the neighbouring farm and shares Etta and Otto's past, is less contented to stay at home. He gets in his truck to pursue her, but Etta is avoiding towns as much as possible, not wanting to be found. At least, not by humans. While walking, a coyote joins her and she names him James.

Like Etta's memories, the chapters in Etta and Otto and Russell and James are often in fragments. The spaces around the words are like the wide-open vastness of the Canadian wilderness that Etta must cross to achieve her goal. Emma's magical prose quickly drew me in. There is a spirituality about her writing - a sense of each word being given its allotted time and space. At other times, there are no words and even the letters Otto sends to Etta from France during World War Two are filled with the holes left by a censor's scissors.

The lives of Etta, Otto, Russell and even James are closely connected. Otto and Russell take it in turns to go to school so that the other can help on the farm. As Otto goes off to fight in the war and Russell is left behind, they begin to take each other's place in Etta's life too. We are all shaped by each other, so where does one person end and another begin? Characters fuse, sharing memories and experiences as if they were their own.

Etta and Otto and Russell and James is a poignant, wise and funny debut. Emma is a lecturer at Bath Spa University, in creative writing and music, and her prose is song-like in its rhythm and timing.

Her playlist choices really reflect the characters, setting and era of the story, here she explains why:

This is Owen’s song. The one he sings by the fire the night before he is killed, and the one that goes on to haunt Otto with his memory. Owen isn’t one of the quartet of primary characters in the book, but he would have loved to have been. He is to Otto as Russell is to Etta, impossibly and, even, given the era and situation, dangerously, in love with him and unsure of how to handle it. The naïve hope of this song, matched with the almost desperate nature of Garland’s voice reflects the character perhaps better than my words can.

I’ll Be Seeing You by Frank Sinatra

This song at once captures the sentimental sound of the book’s wartime setting, and its larger theme of place as the root of memory.

Don’t Sit Under The Apple Tree by The Andrews Sisters

I love how this one group, The Andrews Sisters, managed to make the simple musical phenomenon of close three-part harmony so synonymous with the 1940s, and World War Two specifically. This song, with its theme of lovers displaced by war, is especially fitting.

Sing, Sing, Sing by Benny Goodman and His Orchestra

Etta and Russell take each other to dances as often as they possibly can during the period when Otto’s away at war. The frantic sound of this tune, especially, captures the wild energy of the need of this era’s youth to escape, though dance or whatever else, the sombre and mature issues of the time.

Etta and Otto and Russell, dancing. Just that, so perfectly, in this song.


Many thanks to Emma Hooper for sharing her playlist. Etta and Otto and Russell and James is published in the UK in paperback by Penguin. Thanks to them for my original review copy. Images and playlist courtesy of Penguin, YouTube, Goodreads and Simon and Schuster.

Posted by Claire Thinking at 12:00

Email ThisBlogThis!Share to TwitterShare to FacebookShare to Pinterest
Labels: Emma Hooper, Etta and Otto and Russell and James, Penguin Books