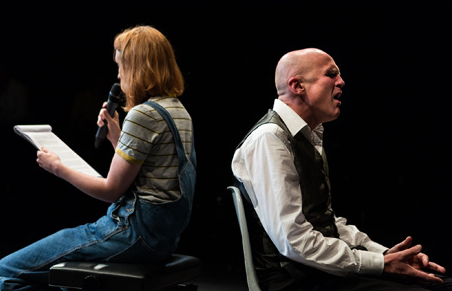 Pay close attention to the date of this performance of An Oak Tree, because it’s the one that belongs to Neve McIntosh. Every night a different actor – who has never seen or read the play before – joins Tim Crouch on stage in this two-hander – either for him to tell them what to say, to read from a script or to pick up their lines through earphones. They met for the first time only an hour ago. This is theatre which is not just different every night, but reincarnated.

An Oak Tree explores the grief of Adam, played by McIntosh, who loses his young daughter in a road traffic accident, knocked over by a stage hypnotist on his way to a gig. Crouch is the Ford Fiesta-driving hypnotist whose show Adam visits; not so much intent on revenge as finding an answer to his overwhelming sense of loss. For Adam, this grief is boundless, formless, blanketing in its density. Surfaces become permeable; rejecting the solidity of the photograph or the hairbrush which comfort his wife, he instead finds his daughter in cracks and indentations - a presence he scoops up and pours into a tree.

Boundaries dissolve and the story fragments as it moves back and forth in time, the actors in and out of character. Crouch controls the narrative, not only as the guilt-ravaged hypnotist manipulating his on-stage volunteer but also as himself, moving his second actor around the minimal set, feeding them every carefully scripted word. He controls us too; with the house lights up he stares out into the exposed audience, instructing us when – and when not – to respond.

Crouch is gripping, almost chilling in his intensity as he drives the pace of the piece with music, traffic noise and pin-sharp timing. It is his intelligence and touches of humour that keep him likeable – having McIntosh compliment the quality of his writing in a seemingly off-hand manner that we know is pre-ordained, leaving her on stage alone while he fetches a glass of water. What he is creating here is magical; no sterile experimentation for the sake of it, this is a forensic deconstruction of the unique nature of theatre, conducted with a gentle understanding of a devastating loss.

The demands on the second actor are daunting; unrehearsed and vulnerable, they must pick up the script instantly, respond to Crouch’s direction and convey the emotions he requires without knowing where they’re leading. In this, McIntosh – soon to be seen on the main Bristol Old Vic stage in The Crucible - doesn’t falter; she may not look all that much like a 46-year-old man, but her portrayal is beautifully judged. She is expressive but avoids the temptation to over-act, effortlessly inhabiting Adam’s character and all-encompassing grief, taking the reversals that Crouch throws at her in her stride.

This is the tenth anniversary revival of this production of An Oak Tree, which originally opened at the Edinburgh Fringe and has since played around the world over 300 times – with 300 second actors taking Adams’s role. It is a play to be watched again and again – to see how different actors might alter the piece and how Crouch changes in response; to reflect on life and loss and to muse on the possibilities that theatre can present if we come to it afresh.