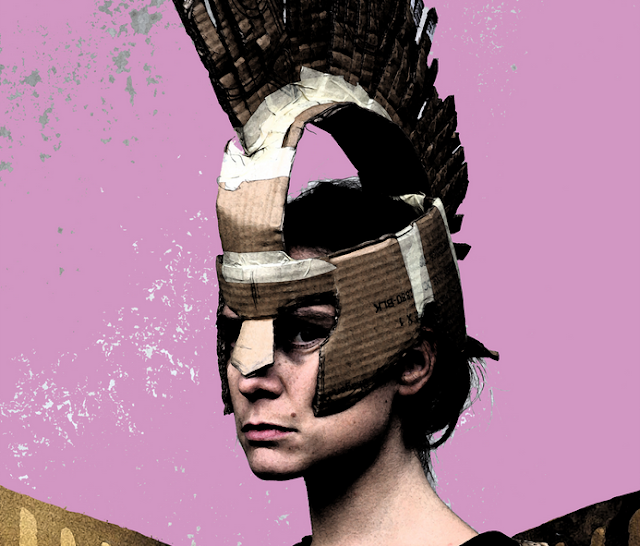 If there was ever an award for the best use of cardboard in a show, it would have to go to Gloriator, a supremely silly reinvention of the Oscar-winning film Gladiator by French/English female comedy duo Spitz & Co. The set and many of the props and costumes – from Roman armour to Emperor’s laurel wreath – have been constructed out of cast-off boxes in a blaze of inspired recycling.
The laughter begins early on, as hapless tour manager Josephine sells lottery tickets to support French actress Gloria Delaneuf’s mission to bring the arts to a deprived community in the depths of the Kungalunga jungle. Apparently, Gloria is a household name in France and Josephine gives us a short presentation of her most famous films (projected, of course, on to cardboard) before the icon herself sweeps imperiously on stage, announcing she will be re-enacting the role made famous by Russell Crowe, while giving greater voice to other previously overlooked female characters in the film.There then follows an inventive and eye-moppingly funny play-within-a-play, full of clowning, mime and physical comedy, as a just-about recognisable version of the story is performed. The cardboard is supplemented by a flurry of wigs, sackcloth and a nowhere-to-hide white leotard; whether bedecked in a bear costume or stripped down to their underwear, this duo displays great on-stage chemistry and an endearing willingness to laugh at themselves. Pauline Morel as Gloria maintains a comical hauteur throughout; she issues forth a stream of commands to Susie Donkin’s puppyishly enthusiastic – but often ineffective – Josephine, who rushes around providing costumes and props, mopping up spills, translating Gloria’s French and playing all the minor roles from horse to ghostly visitor. They’re not afraid to interact with the audience, either. "Is he a plant?" wonders my teenage daughter, as a young man called James is given both the women’s phone numbers in a subversive act of love rivalry on Josephine’s part. It’s his birthday and, invited onto the stage for a crucial scene, he’s rewarded with an unrehearsed chorus of Happy Birthday from an appreciative audience at the end. Silliness seems to come as naturally as breathing to this show; there’s a convincing appearance of anarchic spontaneity which must belie all the thought and timing that’s gone into its creation. Gloriator is like the workout for the facial muscles it at one stage portrays – on the way home, I realise mine are still aching from the relentless laughter of the last hour.