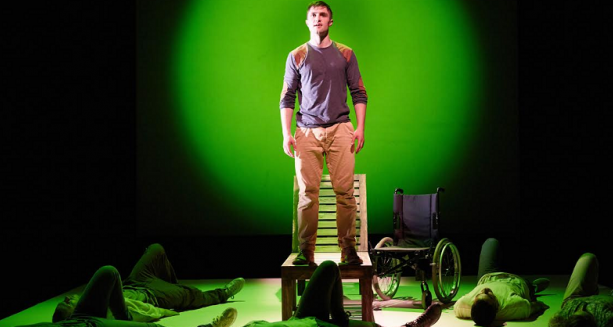 There’s a myriad of colours in Pink Mist, Owen Sheers’ poetic drama which encompasses the brutal effects of war and its aftermath on three young Bristol soldiers and their families. There’s the green and black of night vision goggles and the white heat of the Afghan desert, the friendly fire of blue-on-blue and most of all the pink mist of the title, a harrowing experience when the mate who was fighting alongside you takes a direct hit and vaporises into droplets of blood in the air. Try getting that out of your head in a two hour play, and you begin to have an inkling of what these returning soldiers – often no more than boys – might be going through.


Pink Mist began life to great critical acclaim as a play on Radio 4, distilled from the raw testimony of recently wounded service personnel and their families. Commissioned and produced in Bristol, it’s a fusion of voices and settings from the city: the Thekla nightclub on an ex-cargo ship, the V-Shed bar and the all-too-regular suicides from the Clifton Suspension Bridge. Local references come thick and fast and, on a pared down and specially adapted Bristol Old Vic stage, this feels close to a site-specific production.
Hads, Taff and Arthur were at school together, their most frequent playground chant; “Who wants to play war?” Despite the misgivings of the women in their lives, they join up together too and, ditching their monotonous jobs for basic training in Catterick, feel a new optimism and sense of purpose. But what makes them ultimately breaks them; the willingness to die for a fellow soldier turns to grief, then anger and revenge in a cycle where the mental scars can be even greater than the physical. The hurt stays with them long after returning home, making victims of their girlfriends and mothers, too. The testimony of the women in their lives is equally affecting; this is a life sentence which nobody escapes from.
The challenge of turning a radio play, with its emphasis on the rhythm and lyricism of voices, into a stage performance for six actors has been met head on by directors John Retallack and George Mann, who have developed a complementary physical language – with a nod to the likes of Gecko and DV8 – which captures the cadences of Sheers’ words without overwhelming them. There are flashbacks to battle scenes where you can almost smell the stench of death; the intensity of soundscape and lighting pulling the audience into the heart of the war zone. One choreographed slow motion sequence has an injured soldier thrown backwards through the air – to land, most poignantly, in a wheelchair. A man who was six foot two finds himself without his legs, cut down to just four foot three in the flash of an improvised explosive device.
The young cast is impeccable in both emotional and physical expressiveness; Phil Dunster as Arthur shoulders most of the narration, the first to sign up who persuades Hads (Alex Stedman) and Taff (Peter Edwards) to join him. Zara Ramm portrays all the anguish of a mother who now looks after her son like a small child again; while Rebecca Hamilton as Gwen and Erin Doherty as Lisa must both come to terms with partners they hardly recognise any more.
The voices may be local and contemporary, but the themes of Pink Mist are ageless and universal. Despite the odd glimmer of life going on, this overwhelmingly intense and heart-breaking production demonstrates how normality for those touched by the theatre of war can be transformed into a different and very much darker one.
Reviewed on Monday, 6th July 2015 | Photo: Mark Douet

Posted by Claire Thinking at 10:37