Cover Reveal: The Evolution Of Fear by Paul E. Hardisty

Earlier this year, I read and reviewed Paul E. Hardisty's The Abrupt Physics of Dying (you can read my post here).

Since then, this absorbing and adrenalin-fuelled debut has been shortlisted for the 2015 Crime Writers Association New Blood Dagger for best crime novel by a first-time author. But rather than sitting back and resting on his laurels, Paul has been writing a sequel.

The Evolution of Fear introduces the next episode in the life of Claymore Straker, hero of The Abrupt Physics of Dying. If, like me, you want to find out what happens next to the maverick I described as a cross between Bond and Bourne, then this is for you.

I also mentioned in my review that here we have a novel, a writer and a publisher to watch (not something to say lightly). And so, I'm absolutely thrilled to be able to reveal the striking new cover: 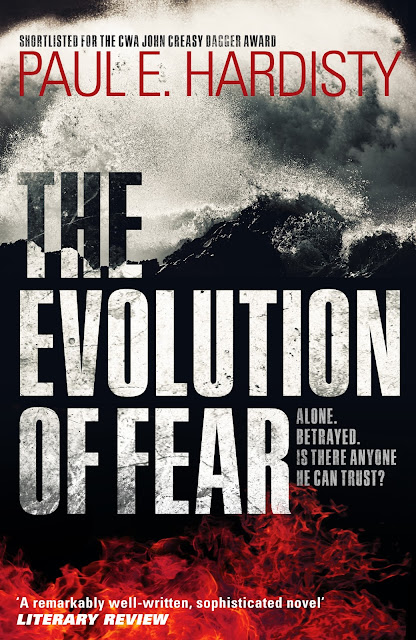 And here's the lowdown:

Claymore Straker is a fugitive with a price on his head. Wanted by the CIA for acts of terrorism he did not commit, his best friend has just been murdered and Rania, the woman he loves, has disappeared. Betrayed by those closest to him, he must flee the sanctuary of his safe house in Cornwall and track her down. As his pursuers close in, Clay follows Rania to Istanbul and then to Cyprus, where he is drawn into a violent struggle between the Russian mafia, Greek Cypriot extremists, and Turkish developers cashing in on the tourism boom. As the island of love descends into chaos, and the horrific truth is unveiled, Clay must call on every ounce of skill and endurance to save Rania and put an end to the unimaginable destruction being wrought in the name of profit. Gripping, exhilarating and, above all, frighteningly realistic, The Evolution of Fear is a startling, eye-opening read that demands the question: How much is truth, and how much is fiction?

The Evolution of Fear will be available in ebook format in December 2015 and in print on 15th January 2016.

Many thanks to Karen Sullivan, publisher at Orenda Books, for supplying the images and details.
Posted by Claire Thinking at 09:15

Email ThisBlogThis!Share to TwitterShare to FacebookShare to Pinterest
Labels: Orenda Books, Paul E. Hardisty, The Abrupt Physics of Dying, The Evolution of Fear