You may already know Jonathan Freedland from his journalism in The Guardian and The Jewish Chronicle. Or, like me, you may be a devotee of The Long View on Radio 4, a programme where he takes contemporary events and seeks out their historic parallels. 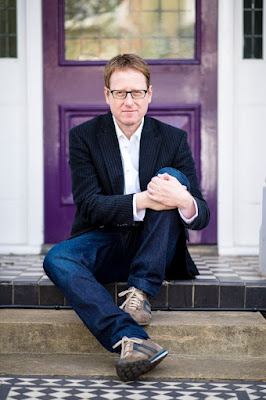 What you might not realise (well I didn't, until now) is that Freedland, who also has a track record of writing best-selling thrillers as Sam Bourne, has penned a novel under his own name. Journalists are often able in fiction to expand upon a premise they might be prevented from exploring in fact, and this makes The 3rd Woman (published on 2nd July by HarperCollins) - with its backdrop of the inexorable rise of China as a world power - all the more intriguing. 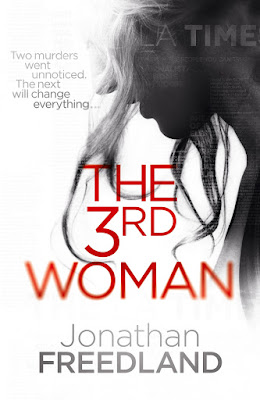 Journalist Madison Webb is obsessed with exposing lies and corruption, but never thought she'd be investigating her own sister's murder. She refuses to accept the official police line that Abigail's death was an isolated crime and uncovers evidence that suggests Abi was the third victim in a series of killings hushed up by the US government.

I haven't read The 3rd Woman yet (my review copy was lost in the post), but this thrilling extract from Chapter Three really has me hooked:

Jeff waited while she threw on the first clothes she could find before leading her to his car. He spoke throughout, telling her what he knew but she digested almost none of it. The only words she heard were the ones that replayed themselves over and over. It’s your sister. Abigail. She’s been found dead.
She was plagued by pictures of Abigail as a child. No matter how hard she tried, she could not see her sister as an adult. One image recurred more than any other: Abigail aged five or six, clutching the doll Maddy herself had once played with, that had, like everything else, been handed down from sister to sister to sister. And in her head, variations on a sentence that would not quite form itself: I let you down, Abigail. I let it happen again. It was never meant to happen again.
They had been driving less than ten minutes when Maddy suddenly sat bolt-upright, heart pounding. It took a moment for her to understand. Even if only for a few seconds, she had fallen asleep. Microsleeps, they called them. They happened to all insomniacs. She knew she was especially vulnerable after a shock; it could prompt her system to shut down. It had happened once in college, after some jerk she had fallen for dumped her, the pain sending her into brief unconsciousness.
Arriving at LAPD headquarters helped. Like a muscle memory, she knew how to walk and talk and carry herself here. She shook off Jeff’s attempts to guide her like the walking wounded, a hand on her waist. She made for the entrance, determined to function like Madison Webb, reporter.
Later she would struggle to remember the exact sequence of those next few hours, even though individual moments were etched in her memory. She remembered pleading with Jeff, asking him to pull whatever strings he could to break the usual protocol and allow her to visit the coroner’s office. Once there, she would never forget the grey-white sheet pulled back to reveal the frozen mask of her sister’s face, her lips a faded purple now, though Maddy had been told they were cold and blue when Abigail’s housemate had found her. Nor would she forget the way the doctor on duty had lifted her sister’s right arm, as casually as if it were the limb of a manne­quin, gesturing to a fresh needle mark. And she would never forget his words, dully announcing to her the provisional verdict based on the state of the body when found: that the deceased had died of a drugs overdose, specifically caused by a massive injection of heroin into the bloodstream.
A silent, glared rebuke from Jeff had prompted the physician to apologize for his use of ‘the deceased’ about a woman who until a few hours ago had only ever been known as Abigail – a vital, joyful, beautiful force of nature. But there was no room in Maddy’s heart for anger about that. She was too numb to feel anything as direct as anger. Besides, she had covered enough murders to know that that was how death worked. You could be energetic, smart and sexy, an Olympic athlete or a Nobel-prize-winning genius, but it made no difference: within a moment you became meat on a slab. The staff in the coroner’s office spoke and acted the way they did because that was all they were looking at. They couldn’t see Abigail. They could only see a corpse.
Finally, Jeff ensured Madison got to meet the detective assigned to the case, Barbara Miller, a former partner of his. Brisk and businesslike, she gave them an initial briefing, describing the way Abigail’s body had been discovered: lying straight on the floor, on her back. An initial, brief search of the apartment could not confirm any forced entry. There were a few marks on the neck and back, but nothing that suggested a struggle.
It was past four in the morning when Maddy left, Jeff still at her side.
‘Thank you,’ she said, her voice a whisper.
‘You don’t have to thank me. You’ve just had the most terrible shock a person can have.’
‘I don’t believe it, you know.’
‘I know. It’s impossible to take in.’ He opened the passenger door for her, touching her elbow as he eased her into the seat.
‘I mean, I don’t believe it. Not a single fucking word of it.’
‘Of what?’
‘What your friend the detective was implying. In there.’
‘What was she implying?’
‘Come on, Jeff. No “confirmed” sign of forced entry. “Nothing to suggest a struggle.” I used to write that shit. We all know what it means. It means your friend thinks this was an “accident”.’ Maddy indicated quote marks with her eyebrows.
‘I don’t—’
‘I’ve seen that look you guys get when you talk about this stuff. She’s made up her mind that this was some kind of druggie sex game that went wrong.’
‘She didn’t say that.’
‘She didn’t have to. No forced entry, no struggle: it means consent. But I’m telling you, I know my sister, Jeff. I know who she is. She teaches elementary school, for Christ’s sake. She is not a fucking junkie.’
Jeff said nothing, so Maddy said it for him. ‘She was murdered, Jeff. Not killed by accident. Murdered. Someone murdered my baby sister.’
Then the words she thought but did not say out loud: I will find out who did this to you, Abigail. I broke one promise to you, but I will not break this one.

Thanks to HarperCollins for providing this extract from The 3rd Woman, to be published on 2nd July 2015. Photo of Jonathan Freedland by Philippa Gedge.
Posted by Claire Thinking at 01:18