Theatre Review: Around The World In 80 Days at The Tobacco Factory Theatre, Bristol 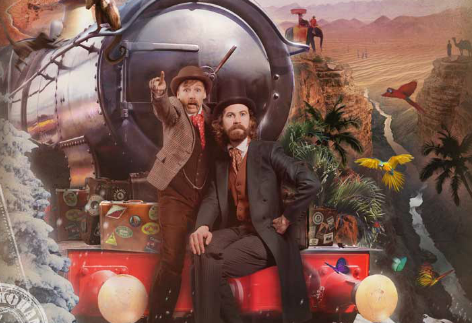 All the sweaty and exotic exhilaration of the travel of yesteryear is evoked in New International Encounter’s interpretation of Jules Verne’s Around the World in 80 Days. As Phileas Fogg sets off on his quest to win a wager by circumnavigating the globe in record time, he and his faithful manservant Passepartout must make their way by cab, train and ocean liner – not forgetting the occasional elephant. It helps, of course, if you can throw money at a trip; when a boat is missed, Phileas and his carpet bag of cash have the resources to charter another one. Anything to avoid the ultimate indignity for a Victorian English gentleman of having to break into a run.
New International Encounter’s classic comedy travelogue – first performed as a family Christmas show in Cambridge last year – sticks closely to Verne’s original 1873 story; unsurprising, given its enduring popularity. The inventiveness comes from this talented ensemble of actor-musicians bringing a contemporary slant; there are delays caused by leaves on the line and an unfinished track, thanks to austerity cuts. For the children in the audience, their clever wordplay extracts every ounce of mirth from lines such as “Passepartout, call me a cab!”

Under Alex Byrne’s direction, NIE also make comically creative use of their musical instruments and set; the piano, in particular, is reinvented as a counter in the British consulate, the body of an elephant and the prow of a ship, for leaning back against Titanic-style. And the potted palms are deceptive too; it may look like they’re there for a bit of Victorian gentlemen’s club scene setting, but rustling and pushing them aside from the actors’ faces recreates a place where the train track has run out in the midst of the deepest, darkest Indian jungle. There’s no shortage of audience involvement, as our fearless hero and his sidekick clamber up through the allegedly jungle-infested seating, inviting parrot imitations and participation in magic tricks. This endearing cast can be forgiven the occasional wandering accent; in a selection of so many it’s all part of the fun. Martin Bonger, recently seen in Bristol as Fat Man, makes a very upright and obsessive Phileas, while Stefanie Mueller, complete with big fake moustache, is a delightfully authentic Passepartout. Ben Frimston perspires deliberately and disgustingly as the seedy Inspector Fix from Scotland Yard, on a mission is to arrest Phileas for having allegedly robbed the Bank of England. Occasionally, it feels as though the production could be pushed a little further; greater pace at the beginning and a heightening of the drama towards the end might introduce at least a little doubt about the outcome in the audience’s mind. But there are some magical ideas – most entertainingly, a less-is-more balloon flight that could teach the extravagant helicopter scene in Miss Saigon a thing or two – which easily justify this Christmas show being revisited all year round.

Email ThisBlogThis!Share to TwitterShare to FacebookShare to Pinterest
Labels: Around The World in 80 Days, Jules Verne, New International Encounter, The Tobacco Factory Theatre