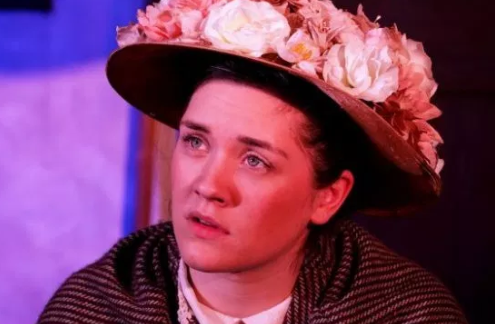 Today’s gig economy may feel like a modern invention, but it shares its heritage with the piece-workers of the early 20th Century, toiling away beneath the breadline with none of the rights bestowed on regularised employees.

Townsend Theatre’s latest production brings this connection into sharp relief, by focusing on the Black Country in 1910 and the women chainmakers of Cradley Heath. The men who produced the heavy metal chains worked in factories for adequate pay, while the womenfolk sweated in cramped outhouses to make the lighter chains, earning a pittance and prey to the middlemen or ‘foggers’ responsible for subcontracting their labour.

Billed as a folk ballad opera, Rouse Ye Women! charts the intervention of the now overlooked Scottish suffragist Mary Macarthur, determined to secure a decent minimum wage for these put-upon ‘sweated’ women. This may perhaps sound earnest – but while always socially aware, this is political theatre with tangible warmth and humour that quickly establishes a strong connection with the audience and engages them in singing choruses and applauding stirring speeches at rallies.

That it does so is due to the charismatic performances of its three-strong cast, from the affable Neil Gore – who as co-writer, singer, musician and chief programme seller also narrates and acts the unsympathetic characters of Albert the Fogger and boss George Williams – to Bryony Purdue as Mary Macarthur and Rowan Godel as the chain-making Bird. Later scenes become even more involving, as audience members entreat Bird not to sign her rights away under Albert’s crafty pleas.

Though enhanced by a combination of narration and acting, director Louise Townsend primarily relays the story through song – evocative new works penned by John Kirkpatrick blended with traditional folk ballads. The inspirational Mary arrives fully formed, speaking up in the face of injustice without her background and motivations being explored – there’s another play that could be written. Purdue’s performance is gripping, expressing Mary’s no-nonsense but cheery determination and warm-hearted powers of persuasion, bringing the melodic clarity of her operatic training to the steeliness of Mary’s songs.

Bird is the everywoman of Cradley Heath, embodying their long hours of toil and suffering; her ballads have a plaintive, yearning quality clearly conveyed in Godel’s voice. Under Mary’s influence, she blossoms into a woman ready to stand up and strike for her rights, no longer willing to accept the fogger’s petty fines or argument that the new wage is unaffordable for the bosses. The women unite, bound together like Mary’s example of a bundle of sticks. In their phrasing, the harmonies between the actor-musicians are uplifting and exquisite, simply supported by guitar, banjo, and mandolin.

This is a big story told on a small stage, a shining example of what can be achieved in a compact space, with Elizabeth Wright’s versatile set – adaptable to theatre, village hall and library alike – comprising Bird’s tiny outhouse and Mary’s office desk. Black and white images projected onto clothes on a washing line – though occasionally obscuring the faces of the actors – bring to life the background of a sweated labour force of women old before their time. Rouse Ye Women! is rousing stuff indeed, with an enduring relevance for all comers who desire to see a burning wrong put right.