Book Review: You Are What You Read by Jodie Jackson

As an avid but somewhat disaffected follower of current affairs, Jodie Jackson's new hardback treatise, subtitled Why changing your media diet can change the world, instantly captured my attention.

If like me you've felt a creeping dissatisfaction with the news in these tumultuous times - the rolling 24-hour cycle requiring a constant turnover of stories, the frequent sensationalism, negativity and lack of depth - then Jackson's book will resonate. She presents clearly articulated and well-constructed arguments about the shortfalls of current news delivery and backs them up with evidence and analysis. 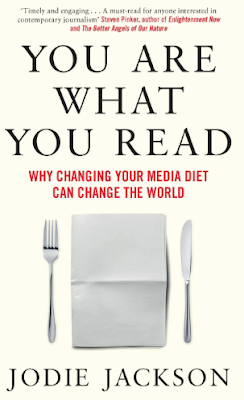 For her master's degree in Applied Positive Psychology, Jackson undertook academic research into the psychological impact of the news, which she shares in this book. As a founder of The Constructive Journalist Project, she goes on to consider how its negative effects could be mitigated, by including a greater emphasis on solutions-focused stories.

Jackson argues that the news media is one of the greatest story-telling industries outside Hollywood and that its objectivity is no more than a veneer, prey to compelling commercial pressures. Thus, to quote Mark Twain; 'If you don't read the newspaper, you're uninformed. If you read the newspaper you're misinformed.'

News is a product and the argument long-held by those in the industry is that bad news sells and there's little that's newsworthy or interesting in the good. They also argue that the role of journalism is to shine a light and uncover injustices so that improvements can be made - such as in the women's movement or racial equality.

While Jackson accepts the validity of these arguments, she also posits that an overwhelming focus on bad news without the counter-balance of any reported solutions warps perceptions, leading us to believe the world is much more dangerous than it really is. Using studies and examples from both the United States and the United Kingdom, she shows how traumatic events framed in sensational terms begin to lose their shock value; pessimism and passive 'learned helplessness' set in, with the feeling there's little we can do to bring about change for the better ourselves.

Yet, Jackson argues, such helplessness can also be unlearned; the news has the capacity to become a guide dog as well as a watchdog. We as consumers can hold journalists to account, absorbing the cycle of stories less frequently but in greater depth. She sets out six ways in which we can do just this, including the avoidance of tabloid reporting and social media echo chambers.

Instead, she recommends in-depth reporting and long-form articles in publications like The Week and The Economist (there's a full list of recommended titles at the back of the book). Ultimately then, the solution lies in our own hands; to become more selective and conscious consumers, retaining a sense of perspective and hope as a coping mechanism in the face of bad news.

There are many sides to this growing debate, and if you're already predisposed to accept this argument you may not need too much convincing. Others surely will, including those already working in the industry and invested in the status quo. Nevertheless, this intelligent and impassioned book adds weight to the growing call for more solutions-focused journalism; recommended reading for anyone wishing to gain a greater sense of perspective and control of their own news consumption.

You Are What You Read by Jodie Jackson is published by Unbound. Many thanks to the publishers for my review copy. 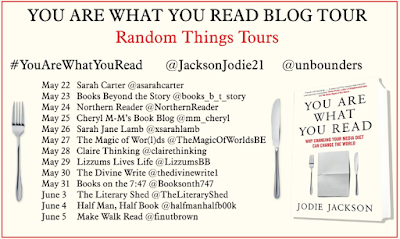 Posted by Claire Thinking at 05:57

Email ThisBlogThis!Share to TwitterShare to FacebookShare to Pinterest
Labels: Jodie Jackson, Unbound, You Are What You Read