Theatre Review: The Stranger on the Bridge at Tobacco Factory Theatres 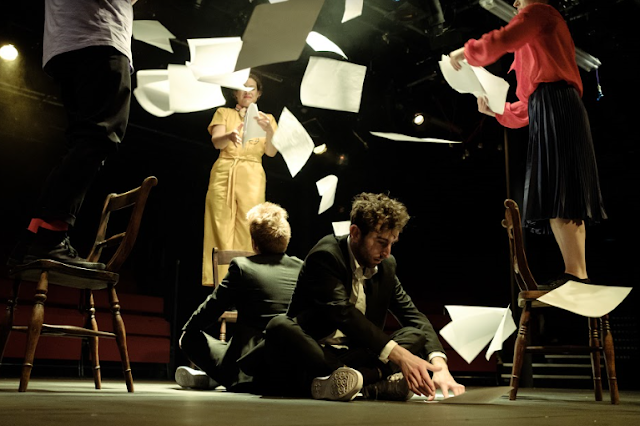 The difference between life and death can be infinitesimally small; captured in the moment it takes for a stranger to stop beside a man on a bridge - a young man balanced on the edge of the railings ready to jump.

Such moments of humanity indicate that a world of support and compassion does exist - that an outstretched hand can help that man survive. In Mental Health Awareness Week, The Stranger on the Bridge explores the real-life reasons that brought Jonny Benjamin to contemplate suicide and his quest to find the man who saved his life on Waterloo Bridge that morning in 2008.

Jonny’s subsequent #FindMike social media campaign was covered in a Channel 4 documentary in 2015. Now in this new play from Katie Hims, developed by Postcard Productions, the timeline alternates between Jonny's search for the man he has arbitrarily called Mike and his life leading up to that fateful day.

It’s Jonny’s story and he’s played with endearing warmth, vulnerability and openness by Jack Brownridge-Kelly - astonishingly in his first professional role - who switches between narration, engaging the audience and acting out key scenes. In a clever piece of theatricality that brings the terrors of mental illness to life, he’s joined on stage by his nemesis, Panda, the voice that has existed in Jonny’s head since he was ten. 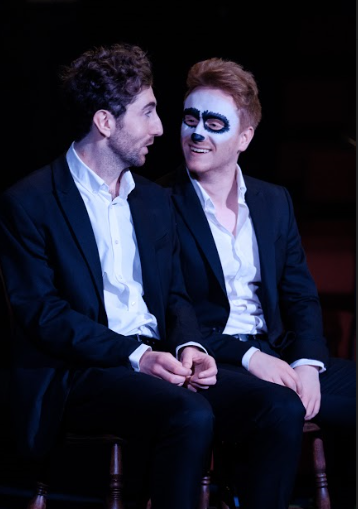 Panda tells Jonny what to do and threatens all sorts of catastrophes for family and friends if he doesn’t obey. A swearing, hectoring and sometimes disturbing presence, he’s energetically and humorously realised by Bristol Old Vic Theatre School graduate Marco Young, building on his last promising performance at the Tobacco Factory in Welcome to Thebes.

As his social media campaign goes viral, Jonny is troubled when one interviewer suggests that Mike doesn’t really exist but is a figment of his imagination. Yet soon, many Mikes step forward and Jonny’s problem is in identifying the right one.

Other characters in Jonny’s life are empathetically portrayed by a trio of actors: Joanna Van Kampen, Robert Macpherson and Jessica May Buxton, who introduce a welcome lightness to the play’s emotional range; stepping in and out of the action as they switch roles, bickering about who should be the next doctor or worrying whether their portrayal is sufficiently true-to-life.

Some of the most affecting moments are when Jonny meets those whose relatives didn’t have a Mike to save them; he faces their anger at a loved one’s selfish act and guilt for not being there to help. But he is encouraged by e-mails thanking him for revealing his struggle with depression, creating a discussion that has made the senders realise they’re not alone.

Lizzie Minnion’s direction of such sensitive subject matter is immediate and beautifully thoughtful. Yet the play's pacing occasionally feels unbalanced; through a desire to include all the details, the initial scene-setting of Jonny’s childhood tends towards the leisurely, delaying our arrival at the heart of the story. By contrast, his time at university, seminal friendships and exploration of his sexuality could have been further developed. 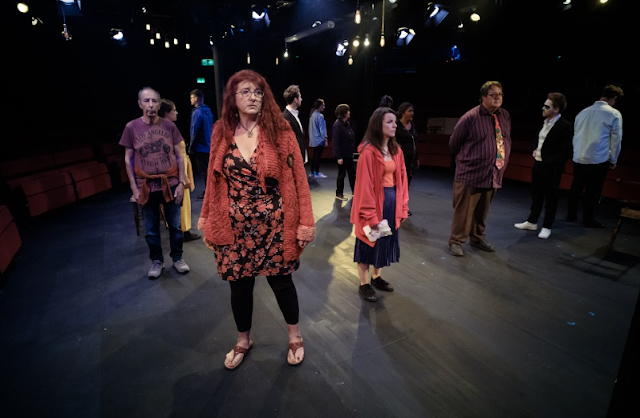 It’s striking how seldom Jonny is helped by professionals - one doctor breezily advising him to eat more fruit and vegetables - in comparison to a stranger’s random act of kindness. Yet help is out there; many organisations are ready to listen, and the possibilities of theatre’s healing role are revealed by the play’s moving conclusion, featuring performers from Bristol-based mental health theatre group Stepping Out.

The Stranger on the Bridge is a courageous and inspiring tale of triumph over despair, poignant in the simplicity of Jonny’s eventual meeting with his saviour, ultimately uplifting in its message that devastating mental illness can be survived and, if not necessarily conquered, then subsequently lived alongside.

Email ThisBlogThis!Share to TwitterShare to FacebookShare to Pinterest
Labels: Bristol, Postcard Productions, Stepping Out, The stranger on the Bridge, Tobacco Factory Theatres