This review was written for The Reviews Hub 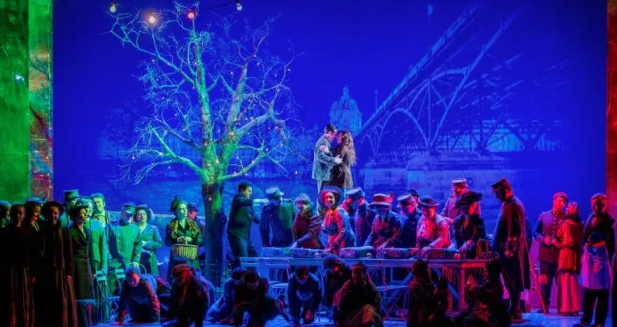 In a fin de siècle Paris recreated from projected rooftops and star-lit skies, the poet Rodolfo and seamstress Mimi, both penniless, meet on Christmas Eve and fall in love. There’s an instant chemistry between Jessica Muirhead’s Mimi and Matteo Lippi’s Rodolfo that convinces from the start; both are dramatically and vocally assured, as they combine with passion in the duet O Soave Fanciulla (Oh Loveliest of Maidens). Muirhead’s sweet soprano soars above the orchestra with a celestial purity that foreshadows her demise, while Lippi embraces the complex range required for an empathetic portrayal of Rodolfo.

To celebrate, they leave the humble garret Rodolfo shares with his fellow bohemians and join the warmth and excitement of Café Momus in the Latin quarter. Here, Rodolfo’s artist friend Marcello is reunited with his former love Musetta, who has tired of her elderly, rich admirer. In this most tempestuous of relationships, Gary Griffiths as Marcello is a charismatic presence, well matched with the flirtations of Lauren Fagan’s spirited Musetta, who waits until the final Act to reveal her tenderness of heart.

There are delightful supporting performances from Jihoon Kim as the philosopher Colline and Gareth Brynmor John as the musician Shaunard, who provide a palpable sense of friendship and joie de vivre alongside their technical skill. Act II in the Café Momus is a visual feast, festooned with coloured lights. WNO’s always admirable chorus is richly detailed and augmented by the lively, skittering presence of a group of children, in thrall to the toy seller Parpignol (Michael Clifton-Thompson) and his wares.

Design and lighting by Stephen Brimson Lewis and Tim Mitchell contrast the riotous colour of the café with the snowy austerity of the tollgate in Act III, as Mimi and Rodolfo’s relationship sours under the weight of his unwarranted jealousy. Conductor Manlio Benzi’s interpretation ensures that WNO’s orchestra always enhances the rousing emotions on stage, as Mimi’s illness takes hold and she is reunited in Act IV with Rodolfo and his friends for one final, fleeting time.

WNO’s La bohème may not push the boundaries of what opera can do, but its traditional retelling focuses on the beauty of Puccini’s score and vividly brings to life the tragedy of the lovers’ story. This is a memorable revival that sates the senses, imprinting in the mind both the searing joy of friendship and love and the poignancy of loss.

Posted by Claire Thinking at 12:59