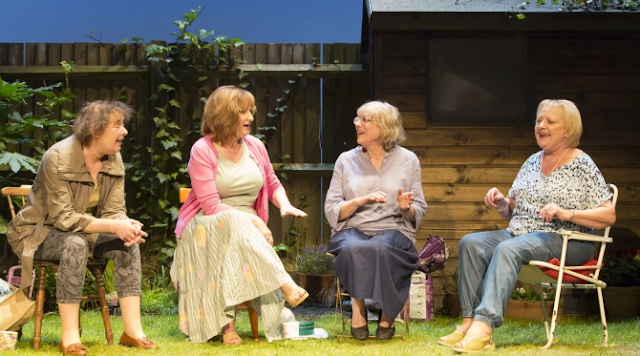 It’s all too easy to dismiss four women of 70 years or more, sitting in a garden on a summer’s afternoon. At this time of life, women are often condemned to a cloak of creeping invisibility – good for a little childcare, but otherwise functionally irrelevant. In a compelling 50 minutes, Caryl Churchill’s Escaped Alone turns this trope on its head; enriching her all-female cast with profound interior lives and the jaggedly recurrent theme of an apocalypse, as told by an elderly woman sporting baggy leggings and a self-inflicted haircut.

It begins with Linda Bassett as the seemingly unshakeable Mrs Jarrett, spotting three women she vaguely knows behind a high garden fence, and popping through the gate to join them. After hardly a murmur, she’s accepted by the others; Deborah Findlay’s Sally, who used to work in medicine but whose charming exterior masks an extreme aversion to cats; phlegmatic ex-hairdresser Vi (June Watson), who doesn’t like kitchens any more for murderous reasons that will become apparent and shy retired office worker Lena (Kika Markham), who thinks it would be better to be in an empty room because ‘then there’s fewer things to mean nothing at all’.

Under a blue sky, they sit and chat about grand-children and TV serials, but their conversation is elliptical, sentences unfinished and pauses non-naturalistic. Then, as the others fade away into darkness, each woman has their own moment in the spotlight to portray their innermost thoughts and deepest anxieties. When it’s her turn, Mrs Jarrett is the least articulate, only able to utter of her ‘terrible rage’.

Her words, it seems, have already been spat out in the episodic retellings that punctuate proceedings; director James Macdonald combines with designer Miriam Buether, as he did in The Father, to create a sharp blackness framed by a coil of sputtering light, in stark contrast to the serenity of the garden. Here, Mrs Jarrett speaks of an apocalypse; ‘songs were sung until dry throats caused the end of speech’; ‘the obese sold slices of themselves until hunger drove them to eat their own rashers’. She conjures up a dystopia that Margaret Atwood might be proud of, but a bewildering one; is this a parallel universe or a prediction of future destruction? Churchill leaves it to her audience to decide.

As an established director of her plays, Macdonald knows how to bring out Churchill’s playful moments, too; in one joyous scene, the perfectly attuned cast sing The Crystals’ 1960s hit Da Doo Ron Ron, as well as discussing aspirations of flying to Japan. These women possess authority, look forwards as well as backwards in their lives and encompass both the domestic and the anarchic. Escaped Alone may be short, often perplexing and obscure, but long after you’ve left the theatre, it still contains a whole world of complexity to contemplate.

Posted by Claire Thinking at 17:35