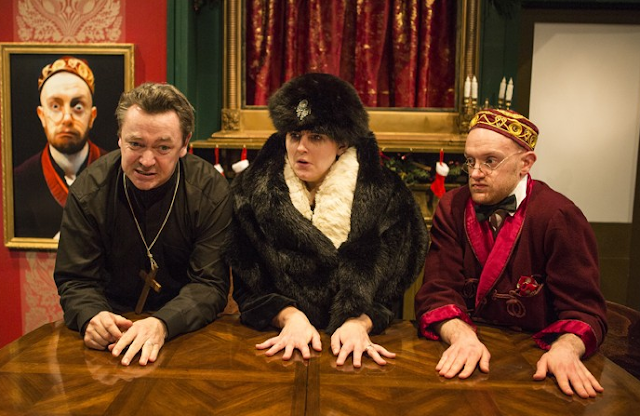 If you’d prefer to hang on to the festive spirit for as long as possible, fighting back against the January gloom, then Crimes Against Christmas, a New Old Friends and Lichfield Garrick co-production, is an intriguing prospect.

A good old-fashioned, grown-up antidote to the traditional family pantomime, this new caper from the pen of Feargus Woods Dunlop takes the golden age of murder mystery and plays it for laughs. Take Agatha Christie’s classic thriller And Then There Were None, recast it in a 12 Days of Christmas mould and you get the idea. A group of strangers, mysteriously invited to spend the festive holiday on a remote island, begin to meet their fates in increasingly quick succession and suspiciously Yule-related ways.

An oil baron discovered packed into a drum and a chef suffocated by their own piping bag. As the body count mounts in implausible circumstances, it’s not looking too good for art detective Pete Artridge, faced with a rope and a nearby pear tree.

The premise is a little lengthy in set up but, once established, zips along at a breathless pace with outstanding bursts of verbal dexterity. Woods Dunlop plays the pivotal role of Artridge; penniless, down on his luck and tasked by a shadowy visitor to his detective agency with preventing the theft of a priceless Christmas bauble. He acts the intrepid hero with great relish while narrating an unfolding tale of dastardly deeds and throwing in a few contemporary references for good measure.

Conjuring up a 13-strong guest list from a cast of just four is no mean feat; the other three members of the ensemble take on their mostly convincing multiple roles – from aged resident Duke (Jonny McClean) to nice but dim son-in-law to pampered Russian princess – with such lightning adaptability, it’s hard to believe there isn’t a bigger cast on stage. McClean’s range in interpreting a panoply of characters, including an Italian Don and swaggering street poet, is particularly distinctive and droll.

Don’t expect subtlety; the simple set’s revolving doors spin to their farcical maximum and could at times be offset with direction of greater visual variety and physicality. The clever use of torches to search the island is one welcome interlude and could be taken further. Events become necessarily contrived, but there’s fun to be had in working out the next victim’s untimely demise and satisfaction in finally discovering the true identity of the murderer behind the mayhem.

Posted by Claire Thinking at 13:08