Book Review: The Narrow Road to the Deep North by Richard Flanagan

Back in 2014, I was keen to get my hands on Ali Smith's latest novel How to be Both - we'd just chosen it as our next book club read.

In a flurry of optimism, given the Man Booker isn't generally my favourite prize, I bought one of those bundles of the whole shortlist. There were a couple of other titles I thought I might read before the prize was announced.

Needless to say, the only one finished was How To Be Both (which I loved), with the rest of the books consigned to the depths of my TBR pile. Earlier this year I ferreted out Karen Joy Fowler's We Are All Completely Beside Ourselves and was blown away by that, too.

Since then, my eye has repeatedly been drawn to the eventual winner, The Narrow Road to the Deep North. How stunning must it be to have beaten two such strong contenders? Only one thing for it - read it myself and find out. 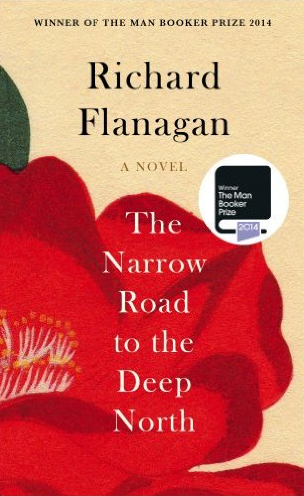 Australian surgeon Dorrigo Evans, captured by the Japanese in the Second World War, is imprisoned in a jungle camp where POWs are forced to build the notorious Burma Death Railway. Here, Dorrigo and his Aussie camp mates endure the most gruelling physical and mental privations. Prisoners have few rights and are treated no better than slaves; malnourished, beaten and literally worked to death. Cholera is rife; despite this, Dorrigo must stand by as his patients are dragged out of hospital to make up work gangs and he's reduced to performing operations without surgical instruments or anaesthetic.

Flanagan writes with sensitivity and authenticity; the frequently harrowing passages in the squalor and monsoon rains of the jungle vividly detail the mental and physical struggle to survive. In their communal suffering, the motley crew of men from the furthest-flung corners of Australia are spirited but never saintly. Tiny Middleton works at such a rate that he sets an unachievable target for the rest of the men, while Rooster MacNeice harbours a festering resentment over the perceived theft of a duck egg.

The pressure on their Japanese captors is also well drawn; driven by a code of honour that sees death as a preferable alternative to imprisonment and always battling to fulfil the ever increasing demands from high command. Yet, the Japanese still show vestiges of respect to fellow officers, and Dorrigo is able to mitigate the worst of their orders by daily negotiating down the numbers of men required in the gangs. Concentrating on leading by example, on being 'the Big Fella' to his men, he's haunted still by the intense love affair he had before the war with Amy, young wife of his uncle. An affair which ended as Dorrigo was leaving to fight and already promised to another woman.

While captivated and horrified by the graphic events in the jungle, I struggled to engage with Flanagan's narrative outside of them; the post-war difficulties of the Australian survivors returning home, the rehabilitation of their Japanese captors into family men. While this sounds equally engrossing, for me the prose veers here towards the overblown. Most importantly, Amy simply doesn't ring true in my imagination as a living, breathing character. While the depiction of suffering in The Narrow Road to the Deep North recalls Sebastian Faulks' First World War saga Birdsong, the claustrophobic intensity of the affair Faulks describes between Stephen Wraysford and the married Isabelle seems lacking in Dorrigo and Amy's story.

A significant work and a contender, certainly, but this wouldn't have been my pick as winner. Only three more of the shortlist to read and, finger on the pulse, I might be finally able to form a definitive view of the Man Booker Prize for 2014.


The Narrow Road to the Deep North by Richard Flanagan is published in paperback by Vintage.
Posted by Claire Thinking at 17:07

Email ThisBlogThis!Share to TwitterShare to FacebookShare to Pinterest
Labels: Richard Flanagan, The Narrow Road to the Deep North