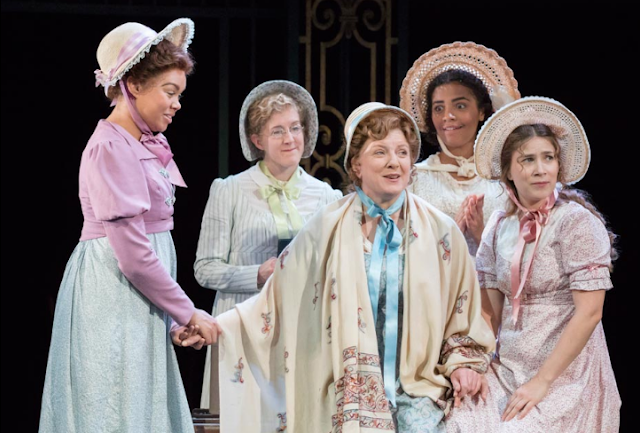 Regent’s Park Theatre’s revival of its 2013 open-air Pride and Prejudice comes to the Theatre Royal in Bath, following in the literary footsteps of its previous productions To Kill a Mockingbird and Lord of the Flies.

In a city that claims Jane Austen as one of its own – with a dedicated centre and festival – Simon Reade’s adaptation needs to do more than just re-hash a storyline already so familiar, not only from the novel, but also the multitude of film and television versions it has spawned. And he does this in style; enlarging from page to stage via Max Jones’ wrought iron, two-storey revolving set that brings an elegant fluidity and dynamism to its scenes.

The 2017 tour sees a new cast for this production; Felicity Montagu is the embodiment of bustling busybody Mrs Bennet, delivering Austen’s ‘truth universally acknowledged’ with sincerity, as she frets over the unmarried state of her five daughters. Montagu avoids the trap of farce and provides much of the play’s narrative drive; a chivvying, frantic ball of energy. And for good reason; without marriage, her family’s property will be entailed away and her daughters left destitute. All very well for Mr Bennet to sit and criticise with caustic asides, delivered with perfect timing by an on-form Matthew Kelly.

Tafline Steen as Elizabeth Bennet is a vital new force; finding the full range of Elizabeth’s determination – tantamount to foolishness in her day – in refusing not one but two marriage proposals. Steen’s Bennet is charming, refreshing and quick witted, never cowed by greater wealth or social status; it’s easy to see why Benjamin Dilloway’s Mr Darcy falls for her against his better judgement, even as she veers towards the headstrong and unmodishly opinionated. And yet, the development of this central relationship is not completely satisfactory; Darcy doesn’t unbend quite enough towards Elizabeth here and their animosity works better than its reverse. At the end, an essential chemistry seems lacking between them.

Other notable performances come from Steven Meo as a suitably ridiculous and oleaginous Mr Collins, providing many of the play’s comic highlights in his role as the cipher of Lady Catherine De Bourgh, and Kirsty Rider, making an impressive professional debut as the waspish Caroline Bingley.

Inevitably, there are aspects missing; Wickham becomes little more than a plot device and, despite best efforts, it’s impossible to capture fully Austen’s authorial voice and her characters’ interior musings.

Still, Deborah Bruce’s direction brings clarity to the condensing and reordering of complex themes and many enjoyable touches, such as the family’s synchronised flourishing of napkins at the dining table. Tom Piper’s costumes are stylish and versatile in effortlessly accommodating changes to scene and occasion, while Lillian Henley’s original composition enhances the atmosphere. Regent’s Park Theatre has produced an attractive and pleasing staging of a much-loved classic that never fails to entertain.

Posted by Claire Thinking at 12:02