Book Review: The Bastard of Istanbul by Elif Shafak

In her acknowledgements at the back of The Bastard of Istanbul, Elif Shafak mentions that in 2006, between the Turkish and English editions of this novel, she was put on trial for 'denigrating Turkishness'.

As a result of the words spoken by some of her fictional Armenian characters, Shafak could have received up to three years in jail. Charges were eventually dropped, but it still highlights the risks many writers face in getting their stories published. More than ten years later, according to a recent statistic in The Independent, of the 259 journalists in prison around the world, 81 are in Turkey. Who knows how this may change in the turmoil of the months ahead.

Turkish collective memory dates back to the birth of their modern secular state in 1923, an event that ruled a line through what came before. In contrast, the identity of the Armenian diaspora is firmly grounded in its past; the persecution they suffered during the genocide of 1915 is still disputed by Turkey. It's her depiction of these events that led to Shafak being charged. 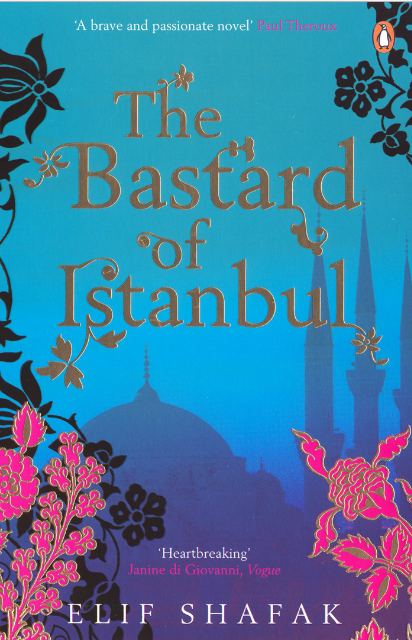 Zeliha Kazanci is nineteen and unmarried when she makes her way to a doctor's surgery for an abortion. Short skirt, high heels, beautiful and determined in the face of the wrong sort of attention on the streets. Zeliha is a modern Turkish woman, the very antithesis of  a traditional stereotype. But amid the noise and bustle of Istanbul, she too is in chaos, and the appointment doesn't go according to plan.

Twenty years later, Asya Kazanci lives with her extended family of womenfolk in Istanbul; due to a mysterious curse, all the men in her family die in their early forties. Her mother, Zeliha, now runs a tattoo parlour, but Asya treats her as just another one of her aunties; alongside clairvoyant Banu, with a djinn on each shoulder, schoolteacher Cevriye and crazy, paranoid Feride. Together, they are loud, intense and larger-than-life; despite her protests, they feed Asya every year with birthday cake she doesn't like and send her along to ballet lessons she doesn't want.

Asya has her own ways of rebelling; sneaking away to the enigmatically named Cafe Kundera and a group of wryly-observed Turkish intellectual archetypes including the Dipsomaniac Cartoonist, The Closeted-Gay Columnist and the Exceptionally Untalented Poet.

On the other side of the Atlantic, Mustafa, the one surviving man in the Kazanci family, has exiled himself in Arizona to escape the family curse. There he met and married Rose, divorced from her Armenian husband, and became step-father to her young daughter, Armanoush.

Shuttling between her life in Arizona and her father's family in San Francisco, Armanoush suffers the crisis of identity so familiar to those whose roots are divided; switching between an all-American life with a mother who calls her Amy and the Armenian traditions of grandmother Shushan and yet more well-meaning but over-bearing aunties. Armanoush finds her solace in an Internet chat room of similarly-conflicted virtual friends.

It's as Armanoush delves more deeply into her own identity, and Auntie Banu uses her powers to revisit past events, that the two families begin to come together. Secrets from intertwined past lives are finally unlocked, reverberating through the decades with devastating consequences for both Asya and Armanoush.

Shafak's novel is a paean to Istanbul for all its flaws; the sights, sounds and smells of this meeting point of Europe and Asia in its passions, diversity and chaos. Each chapter title is a different foodstuff - sugar, vanilla, dried figs, for example - and the central descriptions of the meals prepared by both the Armenian and Turkish families - often overlapping in their traditions - are both mouthwatering and intensely evocative.

What begins as one family's story expands its scope across the ocean, bringing together a cast of characters to rival an epic Russian novel, blended with the magical realism of a South American saga. There's religion - both Muslim and Christian - and secularity, humour and pathos, tradition and modernity, all wrapped up in this complex, multi-layered tale of humanity. With the power of history and the interdependence of a divided nation being dissected through the lens of family life, The Bastard of Istanbul is a novel that resonates deeply; a fictional  microcosm of conflicts playing out around the world.


The Bastard of Istanbul is published in the UK by Penguin Books. You can also read my review of Elif Shafak's novels The Architect's Apprentice here and Honour here. Elif Shafak's latest book Three Daughter's of Eve is available in the UK in hardcover from 2 February 2017 published by Viking Books. You can read The Lonesome Reader's review of it here.
Posted by Claire Thinking at 19:52

Email ThisBlogThis!Share to TwitterShare to FacebookShare to Pinterest
Labels: Elif Shafak, The Bastard of Istanbul