Since its publication in 2014, Carys Bray's novel of one family's struggle to come to terms with their heart-breaking loss has been shortlisted for the Costa First Novel Award and longlisted for the Desmond Elliott Prize. It's now just out in paperback and has been chosen as one of the Richard and Judy Book Club's 2015 Summer Reads (available through W H Smith).

So, if you haven't read it yet and need to know why you should, here's my review of A Song For Issy Bradley from June 2014. It's a great choice for discussion too, so at the end of my post I've included a reading group guide, provided by those lovely folk at Windmill Books. 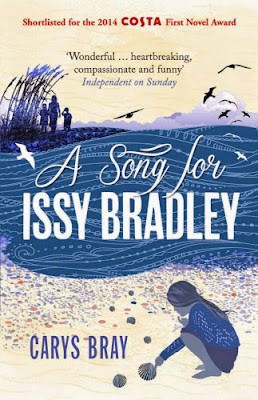 A Song For Issy Bradley is a rare book, one with such emotional honesty that you feel it must have been ripped straight from the heart of its author and transplanted onto the page.

The Bradleys could be any other ordinary family living in the north-west of England - but they're not. They're Mormons and Ian, husband of Claire and father of the four Bradley children, is a Bishop so dedicated to his flock that he misses his son Jacob's seventh birthday party. Claire is preoccupied with preparations for the day and the older two children each have their own worries; seventeen-year-old Zippy thinks she's in love and son Alma would rather be playing football. Nobody notices little Issy, spiralling into the clutches of an illness that's far beyond the reach of a hurried dose of Calpol.

The death of a child can never be an easy subject to read or write about, but in Carys Bray's hands it becomes a sensitive and profound exploration of bereavement, unfolding from the perspective of each member of the Bradley family as they struggle to come to terms with guilt and loss. Claire begins to question the very basis of her faith which was never as strong as her husband's, while Ian sees death as a temporary parting until the family can be reunited in the Celestial Kingdom. Zippy and Alma are already questioning a world where men are expected to go on a mission to convert non-believers and women to marry and have children. But it is young Jacob, steeped in the power of miracles both great and small, who often touches the heart most of all:


Dad said he would understand it better when he was older. But Jacob understood something right then. If he wanted Issy back, he was going to have to make it happen himself.

From the very first page, it's clear that A Song For Issy Bradley is a novel which will force you to face some of your deepest fears and, in doing so, move you to tears. It's enhanced by an elegantly detailed sense of place, as when Claire walks along the beach near her home:


The track is sandier now, damp and sticky, gritty, like cake mix. It's stamped with a network of prints. There are wide tide-marks from cockling vehicles and thinner tracks from bicycles. There are footprints, paw prints and birds' prints, some tiny, others surprisingly large, pronged like windmill blades. As she continues, the texture of the sand changes; it is speckled with a mosaic of broken shell pieces which draw her towards the sea like a trail of breadcrumbs.

What I wasn't expecting is that just as your tears are in danger of becoming a river, there's laughter to stem the flow. The Bradley family are contemporary, believable and so real that you begin to inhabit their characters. You feel Alma's frustration as he's expected to clean the chapel toilets on a Saturday afternoon rather than go to football training and touch Zippy's horror when a photograph of herself in her Mum's wedding dress ends up on Facebook. Most of all, you wish you could reach out and give Jacob a big hug, while at the same time suppressing a smile as his attempts at the miraculous go awry.

In this, her debut novel, Carys Bray writes about the Mormon church with an eye for the everyday and a fascinating insider's knowledge, having been born, brought up and married in the faith. If, like Ian, you accept its beliefs without question, there's clearly comfort in this certainty, but there's also no allowance for a doubt like Claire's nor for a way of mourning which deviates from the prescribed path. You can sense the restriction in adhering to doctrines at such variance with secular society, especially for teenagers like Alma and Zippy, who just want to fit in with their friends. 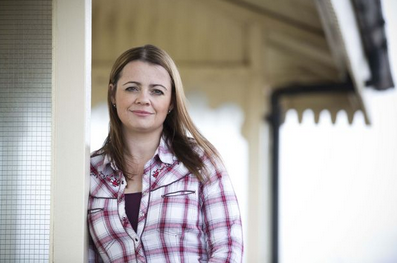 Carys and her husband lost one of their own children as the result of an inherited metabolic disease, a tragedy which brings a searing truthfulness to her writing. Yet, although she and her family have now left the Mormon church, her often forensic depiction of its members and routines still retains a great deal of sympathy.

From its cover to its final page, A Song For Issy Bradley is a beautifully balanced and delicately expressed novel both inside and out. Through tears and laughter, there is great courage in this miraculous book and it is this which, despite the depths of one family's devastation, makes it such an ultimately warm and uplifting read.

1. Did you enjoy A Song for Issy Bradley? How did you feel reading it – amused, sad, disturbed, confused?


3. Do the main characters change by the end of the book? Do they grow or mature? Do they learn something about themselves and how the world works?

4. What aspects of the plot did you find engaging – what interested you the most?

5. Talk about the book’s structure. Did you like reading the story from the perspectives of each member of the family? Why might Carys have chosen to tell the story the way she did – and what difference did it make in the way you read or understood it?

6. What themes does the book explore?

7. What passages strike you as insightful, even profound? Is there a particular piece of dialogue that’s funny or poignant or that encapsulates a character?

9. If you could ask Carys a question, what would you ask?

10. Has this novel changed you – broadened your perspective? Have you learned something new or been exposed to different ideas about people or a certain part of the world?


A Song For Issy Bradley was published in paperback in the UK on 7th May 2015 and is available here as one of the titles in the Richard and Judy Book Club 2015 Summer Reads. Many thanks to Windmill Books for my copy and for supplying the reading group guide.

Posted by Claire Thinking at 13:54