M J Carter has chosen an evocative setting for the opening of her debut novel The Strangler Vine; the seething morass of humanity that was Calcutta in 1837. The city was a major outpost of the East India Company, an organisation so powerful it controlled much of the sub-continent through its own private army. 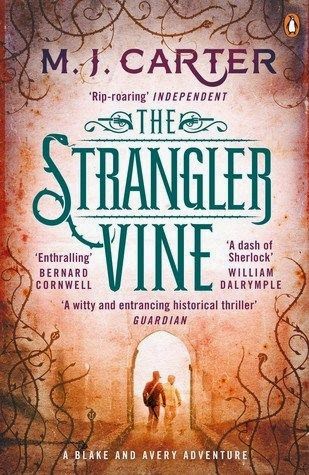 Against this colourful backdrop, Carter introduces William Avery, a junior officer from Devon. He's kicking his heels, drinking heavily and losing at cards, until unexpectedly sent to accompany the irascible Jeremiah Blake into the mofussil or outback.

Special Inquiry Agent Blake's mission is to track down missing writer and national hero Xavier Mountstuart, rumoured to be studying a murderous sect of Kali-worshipping Thugs. But Mountstuart has recently published a controversial novel and, with many of the Company unwilling to even mention his name, the circumstances of his disappearance appear increasingly sinister.

As they venture deeper into the mofussil, it's evident that Blake is no archetypal Company man. Initially, Avery's concern is the discomfort;


It became clear we would not be staying in a dak bungalow such as Europeans usually stayed in...but in small native tents which Mr Blake expected me to help to erect. Of course, with only a few natives, I realized that I would have to abandon any notion of Calcutta levels of service and that if I did not help we would all become even wetter and hungrier than we already were. And so I laboured, tired, sick, resentful and drenched.

The pace of the story really begins to build as they travel from the whispering insurrection of Benares to the opulence of Doora. Hardship fades into insignificance when the mismatched duo find themselves facing one threat after another, often from the most unpredictable of quarters.


For mile after mile the strangler vines choked the sal trees, one grey trunk encircling another, until the whole jangal appeared like some terrible tangled knot in which it was impossible to tell murderer from victim.

As the Thugs are said to strangle their victims, so Company men with their attitudes of entitlement are intent on choking out the existence of the independent princely states within their territories. But nothing is as it seems and Avery and Blake must put personal animosity behind them to fight together for their very survival. In The Strangler Vine, Carter tells Avery's story with an atmospheric sense of place and a well-researched grip on the realities of pre-Victorian India, as you'd expect from a writer better known for her journalism and non-fiction. There's many a vibrant tableau, an enthralling tiger hunt and no shortage of derring-do. If occasionally the descriptions of resplendent court scenes are a little over-long, the twists of the plot make up for this through intrigue and fast-paced entertainment.

The protagonists are completely believable, but with such a large cast of characters, some of the more minor ones are bound to be sketchy. Avery's relationship with Helen Larkbridge could have been more fleshed out, although Carter may be saving this for her sequel, The Infidel Stain. Other than this, it's wholly satisfying to see Avery maturing from a callow youth brimming with Company attitudes into a stronger, more worldly-wise man, while his tenuous bond with Blake is the central thread which stitches their epic misadventures together.


Thanks to Penguin for my review copy.

Posted by Claire Thinking at 10:50