Any play directed by Lucy Bailey promises a bold creative vision and King Lear, part of the Theatre Royal Bath's 2013 summer season, is no exception. Shakespeare's epic tragedy of family betrayal opens in a typical 1960s London east end pub with chain-smoking sharp-suited gangsters and their thuggish skinhead lackeys. I haven't seen Lear performed before (another tick for my own pretty epic Shakespearean bucket list), so had no preconceived ideas to work with, but the scene was immediately set for an intriguing interpretation of a familiar, oft-told tale.

Old King Lear has decided to divide his kingdom between his three daughters, on condition that they each describe how much they love him. Goneril and Regan are fulsome and fluent in their praise and it's only Cordelia, his youngest, who hesitates to put her love into words. Lear flies into a rage and disinherits her, dividing what would have been Cordelia's land between her two siblings. Fortunately, one of Cordelia's suitors the King of France is still willing to marry her and they leave together. Lear soon discovers the false love of his two older daughters and pays dearly for his erroneous judgement. As Goneril and Regan conspire to deny him his courtiers and his remaining power, the King begins to lose his mind. 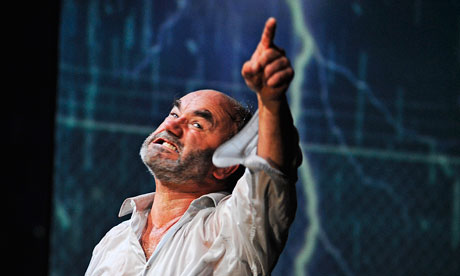 The sub plot meanwhile involves another family conflict between the Earl of Gloucester's illegitimate son Edmund and the legitimate Edgar. Edmund convinces his father that his heir is plotting against him and to save himself Edgar is forced on the run, disguising himself as a deranged and homeless beggar, Poor Tom.

David Haig is commanding as Lear, convincingly enraged by his daughters' behaviour, vulnerable and touchingly believable as he descends into madness and wanders adrift in a storm before eventually being rescued by Cordelia. Paul Shelley is also adept as Gloucester, the other father all too easily deceived by his treacherous offspring, blind to Edmund's faults and later blinded by a vicious attack from Regan's henchmen because of his decision to help Lear.

Edgar (William Postlethwaite) initially appears so innocently bumbling and bookish that it's difficult to believe his father would think he could do him any harm. Postlethwaite more than makes up for this though with Edgar's stunning transformation into Poor Tom, a nearly naked gutter philosopher smeared in grime.

Bailey's sixties gangland setting is an inspired choice for the turf wars and seething malevolence of this play with Lear, his family and retinue of courtiers dressed in the style of the Kray twins. Albany (Daniel Weyman) and Cornwall (Samuel Oatley) are threateningly mob-like and Samuel Edmund-Cook is sexily menacing as Edmund. The staging by William Dudley, incorporating images projected on to suspended gauze flats, is striking, particularly in the opening scene and later when Goneril deprives her father of his remaining power. If anyone it is Lear himself who is sometimes slightly at odds with this vision, the otherwise magnificent David Haig perhaps just a little too cuddly despite his sixties suit and slicked back hair. And while Goneril (Aislin McGuckin) and Reagan (Fiona Glascott) parade themselves somewhat two-dimensionally as brittle gangster molls, Cordelia (Fiona Button) is dressed as though she's on her way to an anachronistic S Club party, her difference over-telegraphed by sneakers, jeans and a snow-white top.

Lear wanders into the storm and the stripping away of the scenery emphasizes his increasing isolation. The play draws towards its powerful and bloody conclusion and it becomes more difficult to recognise the time frame because the violence of the thugs could belong to almost any era. This version of King Lear is not flawless and the opinions I have heard of it have been divided, but it reinforces the universal nature of Shakespeare's themes. In turn harrowing, shocking, funny and moving, this is an ambitious and memorable production from Lucy Bailey and the Theatre Royal Bath team.

Pictures courtesy of the Theatre Royal Bath. King Lear completed its run at the theatre on Saturday, 10th August 2013.