May We Be Forgiven by A.M.Homes

A.M.Homes' latest novel May We Be Forgiven is difficult to categorize, which is one big brownie point in its favour as far as I'm concerned (don't you hate it when the whole narrative is already neatly summarised on the back of a book, with no space for your own interpretation?) The story begins with Harry attending Thanksgiving at the house of his younger brother George, a successful TV executive who presides over a table of superficial power cronies while his wife Jane and their children subsist around the periphery. 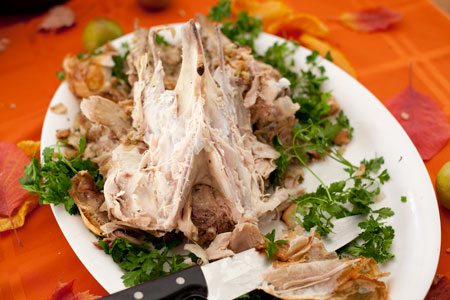 But then there's a seismic shift in family dynamics as Jane kisses Harry over the cleared-away turkey carcass, with unforeseen repercussions rebounding all over the place. Harry is an under-achieving Nixon scholar trapped in a sterile marriage and thankless professorship, so in many ways it seems he doesn't have too much to lose by embarking on an affair with his brother's wife. In reality of course, he must lose himself, bottoming out in a pit of emotional despair as his relationships, career and health all deteriorate, to find himself once more as he steps tentatively into his out-of-control brother's shoes. And as he does so, he realises his previously alienated nephew and niece, Nate and Ashley, not to mention his brother's dog and cat and house, are a lot more engaging than he thought.

The story begins with a car crash and a murder and then the pace really begins to quicken. This is a darkly comic feverish brain dump of a narrative, set in Westchester and with New York frenzy written all over it, bombarding you at every opportunity with new characters and events. It's certainly a page-turner that makes for an exhilarating ride, but I often found myself wishing a strand like the girl who goes missing or Ashley's affair with a teacher at her school could be developed in more detail before being cast aside for the next big idea that comes hurtling along. As it is, there are so many passing characters and sub-plots, some more successful than others, that the narrative can become confusing. And for some reason I often forgot this was supposed to be a man narrating the story and repeatedly read Harry as a woman - perhaps that's just me or is he quite in touch with his feminine side?

Despite his health problems, Harry finds himself able to indulge in a lot of easily available sex without too much of a problem, much of it amusing, some of it unexpectedly thought-provoking. And I did enjoy his family relationships - first and foremost his volatile and frequently violent relationship with George, but also with his mother who goes through an almost Lazarus-like reincarnation, as well as Nate, Ashley and various other assorted relatives.The whole Nixon thing didn't do too much for me, but I can appreciate it's a great deal more relevant if you're an American citizen. Likewise the South African adventure, cosseted Americans rediscovering the meaning of life as their material comforts are stripped away, was rather cliched and an unnecessary continent too far.

We now know that A.M.Homes is the winner of this year's Women's Prize for Fiction with this book and I'm sure I wasn't the only one to be a little surprised when the result was announced. Reading it felt a lot like lifting a large plant pot that hasn't been moved for a while, to discover a seething microcosm of life underneath. Some things you find there are more interesting than others, some might be no more than a desiccated carapace, but it does makes for a pulsating, sometimes repulsive yet fascinating whole. Ultimately, I found this an uplifting story of one man's redemption through reconnecting with humanity - but don't let me tell you what to think, you need to read it for yourself.
Posted by Claire Thinking at 20:16

Email ThisBlogThis!Share to TwitterShare to FacebookShare to Pinterest
Labels: A.M.Homes, May We Be Forgiven