A Question of Empathy

When my first baby was born, I remember being all het up about bonding with her. What if she didn't like me much? What if she gazed over at all the other capable Mums in the maternity ward and realised she'd drawn the short-straw with this overwhelmed-looking woman who seemed incapable of putting her nappies on straight or helping her to latch on?

I raised my fears with the midwife, but was dismissed with a breezy 'It'll come naturally!' as she swept past to the next bed, which left me feeling even more inept. Suppose it didn't? Would I end up raising a sociopathic monster like the serial killer in We Need To Talk About Kevin? Why exactly was bonding so vital and if it didn't happen straight away, would we ever be able to catch up?

My nappy changing techniques always left a lot to be desired and, having eventually mastered breastfeeding, I then went in to meltdown over introducing a bottle. Things only really started to click into place when my baby began reacting to my voice and smiling as soon as she saw me. I realised I was the one making a difference to her life, keeping her warm and secure, and that I was as important to her as she was to me. If that's what you call bonding, the creation of that first essential empathetic relationship, then I got there eventually. By the time my second child was born, I was too exhausted to worry about it any more and satisfied myself with feeding and wiping the right orifices in vaguely the right order through a general fog of fatigue.

My children are both teenagers now, but I still wonder about that first bonding experience and whether a baby that misses out is able to catch up or will always have difficulty in empathising with the thoughts and emotions of others. It's generally agreed by psychiatrists that a child needs to be able to bond with an adult of some description, whether or not it's their biological parent. Without this, they tend not to develop the strength to deal with challenges, the ability to bounce back from set backs and to enjoy intimacy with others at a later stage in life.

Where expert opinion divides is on whether empathy, if not developed at the very beginning of life, can be learned later on. Is it a product of nature or nurture or, like most things, a bit of both? The National Theatre's production of Curious Incident of the Dog in the Night-Time highlights the condition that Christopher, a boy diagnosed with autism, has in understanding the emotions and reactions of others. Does autism develop before birth and so make bonding problematic however hard you might try? And why does it so often seem to affect boys rather than girls? 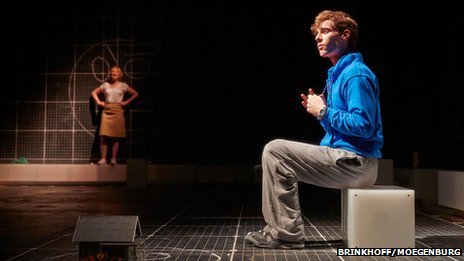 Simon Baron Cohen (cousin of the comedian Sacha) is a professor at Trinity College, Cambridge and director of their autism research centre. In his book Zero Degrees of Empathy, he examines behaviours on a scale ranging from 'systemising' at one end to 'empathising' at the other. There are apparently very few people who excel at both, and Baron-Cohen finds that, even allowing for social and cultural influences, men score much more highly at systemising, and women at empathising. Newborn boys are more likely to look at objects, according to Baron-Cohen, while newborn girls prefer faces.

No surprise there then for any parent who, despite their efforts at gender equality, has a daughter who acts out Barbie beach parties and a son more interested in Ken's car. But Baron-Cohen goes further in describing autism as an extreme form of systemising behaviour - linked he hypothesizes to an increased presence of testosterone in the uterus. His findings are controversial but do go some way to explaining why a parent's best attempts to bond with their baby might meet with little success.

Baron-Cohen does believe that empathy can be taught, however, although it's unclear whether teaching later in life simply allows for the development of a system to recognise various facial expressions and deliver an appropriate response, rather real empathy. Perhaps, as with babies though, that recognition might precede the development of a deeper understanding? It's hopeful to think that those who have had a difficult start in life, for whatever reason, might still be able to achieve some level of personal connection later on.

I was one bewildered mother for many reasons when my first child was born, but I do wish in retrospect that I'd known more about bonding and its importance in the development of empathy. Perhaps I should have read more widely or had it explained at ante-natal classes, along with breathing techniques and winding. It would have been great to have some guidance too, in how it might be achieved if your maternal instinct doesn't flow as naturally as mother's milk or your baby doesn't seem to respond to your efforts. Do you agree? What have been your experiences - did you get the help you needed or do you think more could be done?

Photos courtesy of The Telegraph/BBC/National Theatre

Posted by Claire Thinking at 10:45