Great Expectations: The Curious Incident of the Dog in the Night-Time

What is there to say about the The Curious Incident of the Dog in the Night-Time that hasn't already been said? Mark Haddon's book quickly became a best-seller when it was published in 2003, hailed as a breakthrough in writing about disability and slotting neatly into the English literature curriculum as a set text. Because it's essentially written as the innermost thoughts of Christopher, a fifteen year old boy with Asperger syndrome, it was generally considered impossible to adapt for stage and screen. Much of the reader's engagement with the narrative is derived from our ability to fill in the gaps, to understand, where Christopher cannot in his deceptively simple retelling of events, the problems and pressures faced by those who care for him.

Well, the National Theatre's adaptation proved that with imagination and stagecraft, the seemingly impossible can be achieved. Lauded by critics when it was first staged in the round at the Cottosloe, it has now transferred successfully to the larger setting of the Apollo Shaftesbury Avenue and is nominated for no less than eight Olivier awards including Luke Treadaway for Best Actor, Marianne Elliott for Best Director and the nomination for Best Play.

So my family's anticipation was already near fever pitch when we picked up our tickets for last Wednesday night's performance. We'd booked seats in the Grand Circle so I was worried about the restrictions there might be on our view and breathed a sigh of relief when we settled in the second row and could see all but the very front of the stage clearly. Only minimal leaning was required, although I'm not so sure about seats further back and would advise careful consideration if you're booking in this tier.

The staging is simple but ingenious; the floor and three walls covered with graph lines which serve as a visual introduction to the fundamental workings of Christopher's mind; his preference for logic and difficulty in understanding anything not black-and-white, like metaphors or human emotions. Christopher is writing his book as a record of his investigation into the pitchforking of his neighbour's dog Wellington and the premise for this adaptation is that Siobhan, Christopher's teacher at his special needs school, has suggested turning his book into a play.

Acted by Niamh Cusack, Siobhan provides much of the narrative in reading out extracts as Christopher's investigations uncover much more than he originally anticipated; he meets his neighbours and resolves the mystery of his mother's disappearance as well as Wellington's untimely death. And his decision to track his mother down in London leads him to embark on a hazardous train journey from his home in Swindon, challenging the limits of his ability to interpret the world. His explanation of all the detail he sees when looking out of the train window, compared with the filtered vision of most of the passengers, is a wonderfully lucid insight into the workings of his mind, the logical way in which he processes information and the reason he finds comfort and beauty in the language and certainties of mathematics.

The problem in having great expectations, is that the play has a lot to live up to before it even begins and having seen so many trailers beforehand I'd already discounted some of the brilliance of Bunny Christie's staging and Ian Dickinson's sound. Initially I have to admit to being slightly underwhelmed; Niamh Cusack was a bit too breezy for me, her voice a little strained and I was unprepared for the amount of reading she would be doing on Christopher's behalf.  We'd booked our tickets on a Wednesday specifically to see Luke Treadaway in the role and were surprised when Johnny Gibbon appeared instead; I knew one of my daughters in particular was bound to be disappointed.

Once Christopher took ownership of some of the narrative, however, it was impossible not to be drawn in. Because the play uses Christopher's voice it's very true to the book and allows the same insights into his world. Although we don't have Luke Treadaway's performance to compare with, Johnny Gibbon is wonderful as Christopher, even more so as this is his professional stage debut - he was entirely convincing and surely has a bright future ahead of him. It's much to his credit that by the end of the performance, my daughter was cheering for Johnny (a graduate of Bristol Old Vic Theatre School, after all!) and not even concerned that she hadn't seen Luke. 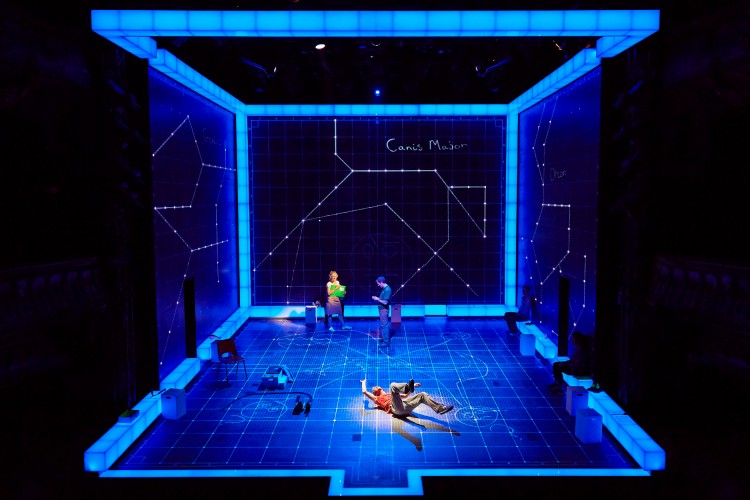 As Christopher's story unfolds, the transformation of the set into houses, roads, trains and particularly the platform at Paddington Station is quite simply breathtaking. The movement, choreographed by physical theatre company Frantic Assembly, is also urgent and mesmerising, particularly when Christopher dreams of being an astronaut and during his personal odyssey on the train, walking on walls, with the world speeding up around him. Sean Gleeson and Holly Aird are movingly estranged and troubled as Christopher's parents, struggling to cope with the care of a vulnerable son who doesn't like to be touched and doesn't fit into the world around him. The ensemble cast switch roles seamlessly as the action swings between bleakness and hilarity, and the ending and appendix, emerging against over-whelming odds, are touching, uplifting and yet always totally believable.

See it if you can - however great your expectations, you won't be disappointed.

Pictures courtesy of The National Theatre

Posted by Claire Thinking at 11:25