Every now and then, you read a book which you just don't want to end. The characters draw you in, you live alongside their lives for a while and then you have to leave them. For me, Foreign Bodies by Cynthia Ozick is just such a book. 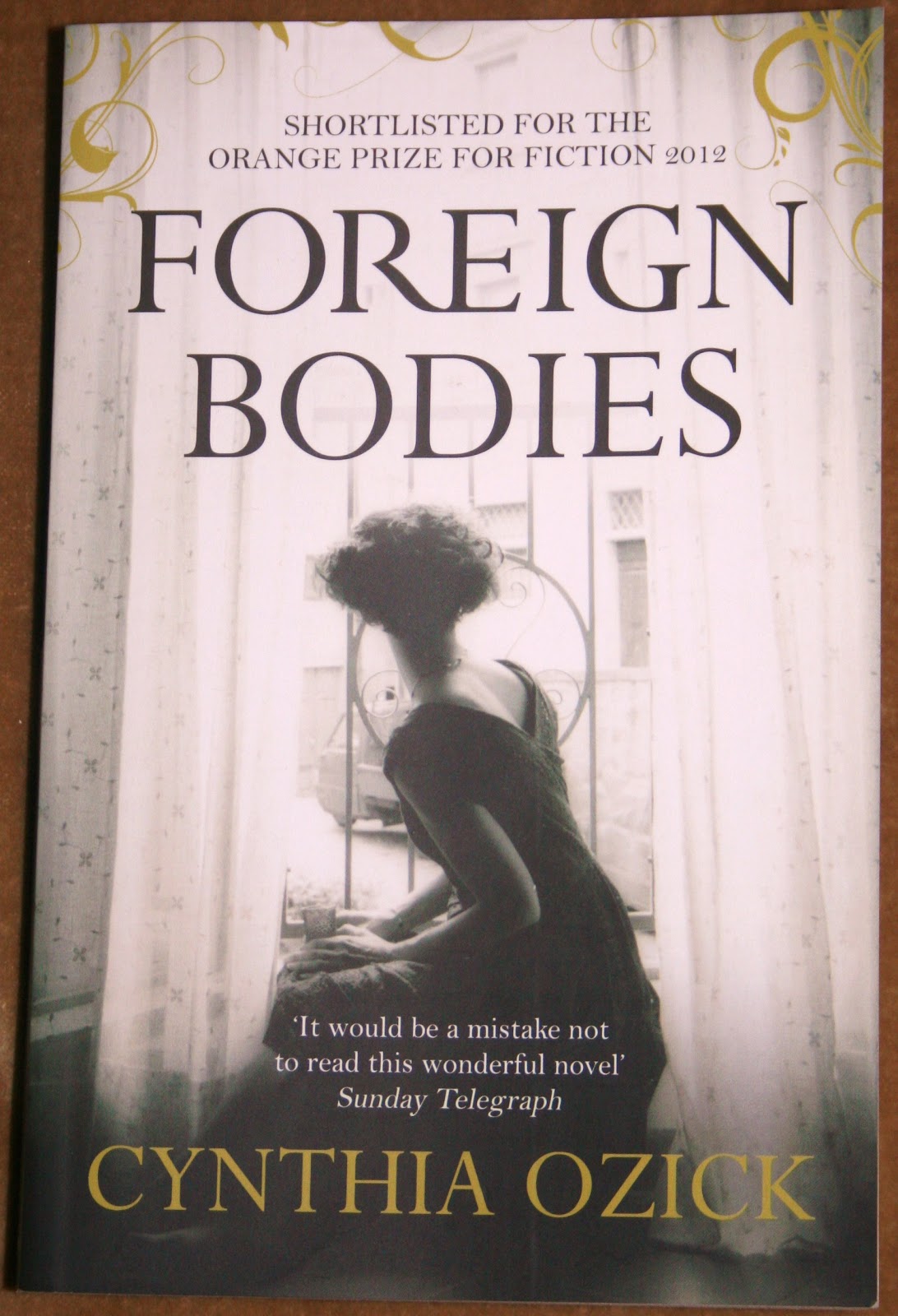 I have to admit I hadn't heard of Cynthia Ozick before she was shortlisted for the 2012 Orange Prize for Fiction with this novel. How ignorant of me, turns out she's a very well established American author, currently living in New York, with a whole host of awards to her name. Her parents were Russian immigrants and one of the themes in Foreign Bodies (and also, from what I've read since, of much of her writing) is the immigrants' desire and ability to reinvent themselves in their new land.

The novel opens in 1950s New York with a letter from Bea Nightingale, a middle-aged teacher of unruly boys, to her brother Marvin. Bea has anglicised her surname for the practical reason that her students found the original unpronounceable, but it is her brother who has truly reinvented himself as an all American success story, at least superficially. By adopting the attitudes and habits of fellow students during his days at Princeton, he has shrugged off the identity of a Jewish outsider;

'he resisted humiliation by accepting it, sometimes almost appearing to invite it: it taught him what was suitable and what wasn't.'

But Marvin has moulded himself into a self-important monster with a big job in California and an ailing wife and family to support. Virtually estranged from Bea, he nevertheless orders her to travel to Paris to track down his errant son Julian, the younger of his children. Bea lives alone and has few ties, he reasons, her brief marriage to a musician, Leo, has long since ended and she can easily put her little job on hold to help Marvin out for once. Bea resents his attitude but is nevertheless drawn into travelling to Europe, to search for a nephew she doesn't even know.

And so she embarks on an adventure in broken, post-war Paris, becoming more and more entangled as she does so in the lives of Julian and his sister Iris. The plot is a sort of inversion of Henry James' The Ambassadors, with Americans seeking restoration in Europe, the young siblings escaping from a 'coddled' existence in California, to tread streets full of real refugees fleeing the ravages of war.

Iris and later Julian, awaken something in Bea, enabling her to move on from the stagnating ties of her brief marriage, symbolised by the large grand piano that passionate composer Leo had left behind in her flat. She helps Marvin's children by deceiving their father in her letters, mainly, though not exclusively through sins of omission. Then, her visit to Marvin's wife, the mentally unstable but clear-sighted Margaret, has consequences more far-reaching than she could ever imagine.

A middle-aged divorced woman with sensible shoes and no children, Bea could be an easy figure to disregard.Yet she is able to hold her own in teaching English Literature to high school boys and and  gradually she emerges over the course of this story as its quiet,though often flawed, heroine. If Bea is introspective and wraps you up in her thoughts, then Ozick's other characters are almost all as complex. Julian and Iris may be aloof and unreachable, often maddeningly so, but I read this as the detachment of youth; there are no two dimensional plot fillers in this novel.

Ozick has an eye for the detail and small disappointments which undermine a life, the decisions which once taken can then unravel the good intentions which originally lay behind them. The letters from Marvin are outrageous yet authentic; Bea's in response become careful yet intending to deceive. There is a wonderful sense of place in this novel; Ozick's descriptions of the oppressively hot and scarred streets of Paris contrast with the oppressively cold and claustrophobic experience of being trapped by a snow storm in Bea's tiny New York apartment.

I don't think I wear sensible shoes even though I probably should, but in other ways I felt myself identifying with Bea and her choices. Perhaps that's why I didn't find it strange that she decided to travel away from her contained existence for a while, towards a continent that was damaged yet full of possibilities.