This review was first written for the British Theatre Guide 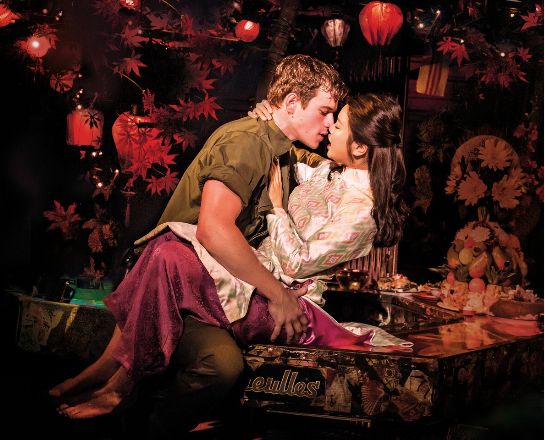 With its epic themes of war, love, and loss set against a heightened score, Cameron Mackintosh’s Miss Saigon was a 1980s West End phenomenon.

Now a new production of the musical, revived by Mackintosh in 2014 for both London and Broadway, is embarking on a UK tour. Can it maintain the breathtaking excitement and captivating relevance of the original for a new millennium audience well-versed in theatrical spectacle and further removed from events surrounding the last days of the Vietnam war?

It certainly dazzles from the outset, with the clamour of aerial strafing and bombardment offsetting the manic hustling energy of Saigon bars. Here, American GIs seek a girl for the night, while the girls in return hope every soldier might be their ticket to a better life in the USA.

Showstopping set pieces pile up in quick succession, highlighted in the slick military display and acrobatics of the new regime in Ho Chi Minh City and the glitz and glamour of “The American Dream”, not forgetting that now iconic evacuation, complete with life-size model helicopter, full of blinding confusion and the desperation of those left behind.

But, while there are noise and action aplenty, it never truly establishes a quieter counterpoint in the central story (loosely drawn from Puccini’s Madam Butterfly) of 17-year-old Kim, an innocent arrival from the country put to work in a brothel by local fixer The Engineer. On her first night, Kim meets and falls in love with Chris, a marine who promises to take her out of Vietnam.

While their duets - especially “Sun and Moon” - are polished with a sincerity that reaches towards the intimate, they are never given quite enough space to develop, before becoming as loud and action-filled as every other number. This same treatment is applied to any instance of profoundly felt emotion, resulting in a show that frequently awes the senses but rarely moves the heart.

The timeline of the narrative, switching back and forth from the end of the Vietnam war to Ho Chi Minh’s regime, can be difficult to follow without reference to the programme. This does not take away from a dexterous songbook and strong performances, particularly from Sooha Kim as Kim, displaying an astonishing vocal range and combining vulnerability with an inner determination, making the most of a role that appears all too passive in this era of #MeToo.

Ashley Gilmour as Chris is a convincing foil as the GI with a conscience and Ryan O’Gorman as John makes a believable transformation from macho marine to saviour of mixed-race children fathered by Americans and abandoned in Vietnam after the war. Elana Martin masters the difficult role of Chris’s wife Ellen while Red Concepción as The Engineer strikes a jocular maverick note at odds with his darkly sinister actions but endearing to the audience, earning him the biggest curtain call of the evening.

What this production lacks in subtlety, contemplation and the chance to interpret a deeper message for yourself, it attempts - not wholly successfully - to make up for in sheer entertaining extravagance. Though the universality of Miss Saigon’s themes still emerges, larger questions are raised around the acceptability of Kim’s abject victimhood and an unquestioning view of America and its dream as saving graces in the 21st century.﻿