Book Review: The Last Thing She Told Me by Linda Green

If a gripping psychological thriller is your idea of the perfect summer read, then Linda Green's new novel The Last Thing She Told Me could well be for you. Not having read any of Green's previous work, its title sounded a little melodramatic for my taste, but within pages I found myself hooked. 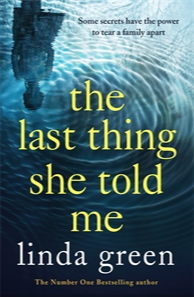 In her final words, Nicola's grandmother Betty tells her there are babies at the bottom of the garden. Are these the hallucinations of a fading mind, or is there something in her claim? Nicola has her suspicions: why has there been a rift between her mother and Betty for as long as she can remember and why won't her mother tell her anything about it?

When her daughter finds a bone in Betty's garden, Nicola is determined to unearth the truth. But just how far is she prepared to go? As the police move in and painful secrets surface, Nicola begins to realise the distress she is causing, not only to her immediate family but also to herself.

The story begins in a domestic setting but soon casts its net further afield in both time and place. Letters and voices from the past are intertwined throughout the narrative and Green has a mastery of detail; in portraying her main character as a teaching assistant in a town on the edge of the Pennines, it feels like she's writing what she knows.

All too often in novels children are underwritten, only there to move the plot along. By contrast, Nicola's daughters Ruby and Maisie are both well-rounded characters, integral to the storyline. Ruby's transition from accepting girlhood to awkward, questioning adolescence is particularly affecting.

The only occasional quibbles are in the ease of selling a house or finding a long-lost relative and the apparent saintliness of Nicola's partner, James. As the haunting truth emerges, it looks like Nicola's family has suffered more than its fair share of misfortunes through the generations. What's more, she still has a fight on her hands to stem the suffering and prevent any further tragedy.

The Last Thing She Told Me is a page-turner in the good old-fashioned sense: compelling you to read on, desperate to fit together its tangled puzzle of pieces, gratified and a little breathless once you do.

The Last Thing She Told Me by Linda Green is published as an ebook on 26th July 2018 by Quercus Books. Thanks to the publisher for my review copy.
Posted by Claire Thinking at 09:32

Email ThisBlogThis!Share to TwitterShare to FacebookShare to Pinterest
Labels: Linda Green, Quercus Books, The Last Thing She Told Me