Readers of this blog will know I'm a fan of Gunnar Staalesen's Varg Veum thrillers - I've reviewed three already (see below) and find myself reeled in by his combination of crisp Norwegian prose and intriguingly twisty storyline. And private investigator Veum is such a flawed but likable protagonist - his personal life crumbling and finances a mess, he readily admits to many a wrong turn in the past, yet retains a dogged determination to uncover the truth in every case he tackles.

So Big Sister, the next instalment from independent publishing superhero Orenda Books (once again translated into English by Don Bartlett), has my senses conflicting with a heady mix of anticipation and trepidation. Leapfrogging its way over my teetering TBR pile to prime location on the bedside table, it has a reputation to live up to. 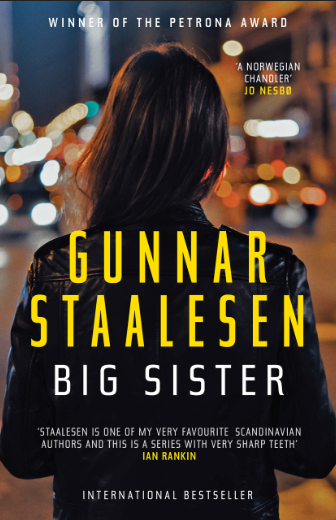 Veum is a lone wolf. Yet his latest case turns out to be intensely personal:


Everyone was welcome to bring whatever they had on their minds. It took a lot to surprise me. Unless they came from Haugesund and said they were my sister.

His newly discovered half-sister, Norma, brings him a missing person case in the shape of her own nineteen-year-old god-daughter, Emma. But, more than this, she opens up questions about his own childhood that have long been repressed. His mother was a worker in a canning factory, the father he remembers a tram conductor with a love of Norse mythology. But who is the shadowy jazz band saxophone player that his mother once knew? And why was his father always such a distant figure?

Chapters begin with a statement and end in a question. Staalesen is a master of detail, drily capturing place:


Rain and income tax arrears are among the surest signs of autumn in Bergen.

while skewering his characters:


He was in his early seventies and the little hair he had was combed back diagonally across his narrow scalp. He wore slender steel-frame glasses and continually peered over the top of them as though they were unable to cope with the distance between us at the table

Intertwined with the personal, Veum sets out to discover what has happened to Emma, a trainee nurse who's lost all contact with her family. She's moved out of the flat she was sharing and isn't answering her phone. But Emma also has a complicated past - a father caught up in a biker gang, disowned because of a harrowing incident in his adolescent past. A mother who became a single parent, full of dependencies. As Veum delves into family history, it turns out there's more than one big sister in the frame and the past has an explosive way of catching up with the present.

For a long while, it appears he's getting nowhere, yet Big Sister doesn't disappoint. Staalesen returns to familiar themes but with new insights, weaving a tale where plot threads - through persistence - eventually yield up their dark secrets. He reveals another side to Veum and the more we learn, the more there is to know.

Big Sister is published in the UK by Orenda Books. Many thanks to them for my review copy.

We Shall Inherit the Wind
Where Roses Never Die
Wolves in the Dark
Posted by Claire Thinking at 00:24