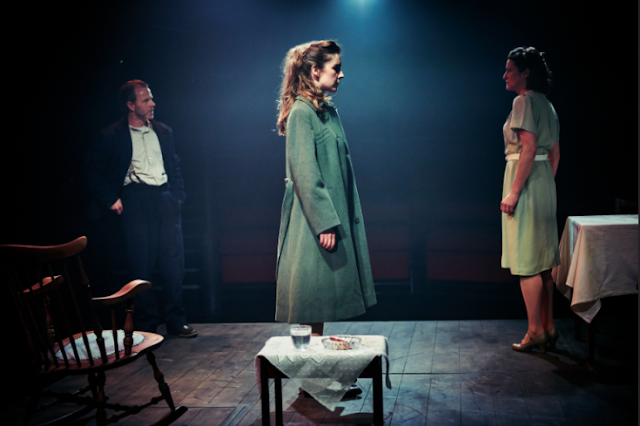 Arthur Miller’s landmark depiction of the 1950s docklands of Brooklyn’s Red Hook – ‘the gullet of New York swallowing the tonnage of the world’ – is authentically recreated in Mike Tweddle’s first production for the Tobacco Factory. The stage is filled with pallets, pulleys and winches echoing in an ominously clanking soundscape.

In the slum housing of the neighbourhood, longshoreman Eddie Carbone (Mark Letheren) comes home to his wife Beatrice (Katy Stephens) and her niece Catherine (Laura Waldren), raised by the couple since infancy. Catherine is set upon taking a job she’s been offered as a stenographer in a nearby plumbing company, but Eddie has greater dreams for her: that she will work in a respectable office over the Brooklyn Bridge.

Further conflict arises when Beatrice’s cousins arrive, illegally smuggled ashore from Italy. Marco (Aaron Anthony) and Rodolpho (Joseph Tweedale) are initially welcomed into the household, but tension builds as Eddie witnesses Rodolpho and Catherine becoming entwined in a relationship. The complexities that hold a man together and bind him to his family and community begin to unravel, strand by strand.

Loosely based on a real-life incident that was relayed to Miller, the story is narrated by the lawyer Alfieri (Simon Armstrong), consulted by Eddie as his troubles deepen. In a world of dark secrets where loyalty is paramount, any recourse to the law can only result in betrayal.

Letheren convincingly conveys the inner turmoil of a decent, hardworking man, head of the household and family provider, whose illicit passion is tearing him apart. Eddie’s desires are slower to surface under Tweddle’s direction than they were in Ivo van Hove’s claustrophobic 2015 version for London’s Young Vic, the childish embrace where Catherine wraps her legs around his waist seeming just that. But the pace quickens with a gripping supporting performance from Stephens, who mines Beatrice’s pain in watching the man she loves moving away from her, showing her emotional strife to be every bit as deeply set as Eddie’s.

Waldren’s commendable portrayal of Catherine in her professional stage debut should come as no surprise to those who saw her Bristol Old Vic Theatre School performances. A heartfelt combination of tentative and courageous, she brings out the excitement and fear of a young woman beginning to make her way in the world. The moments when she questions whether Rodolpho’s love is for her or the American citizenship that marriage would bring are particularly poignant.

Only towards the end, the atmospheric sound effects become overloud and melodramatic, unnecessary in a production that is sufficiently engrossing.

The outside influences of migration on established neighbourhoods are as relevant to explore in Bristol today as they were in 1950s Brooklyn. That there are local players, many of whom haven’t acted before, taking some of the smaller roles, ties in with the strong sense of community threading through this play. The second of the Factory Company’s inaugural season, A View from the Bridge is a thrilling dissection of personal and societal breakdown with the most tragic of consequences.