Book Review: We Shall Inherit The Wind by Gunnar Staalesen

Gunnar Staalesen's latest novel We Shall Inherit The Wind opens with private investigator Varg Veum's desperate vigil at the bedside of his long-term girlfriend Karin. Varg (meaning wolf in Norwegian) will already be familiar to many Nordic Noir enthusiasts as the tough, non-conformist hero of Staalesen's previous novels; an ex-social worker who's been around the block a few times, got damaged in the process but worked out a way to survive.The question overwhelming him now is whether his girlfriend will be able to do the same. 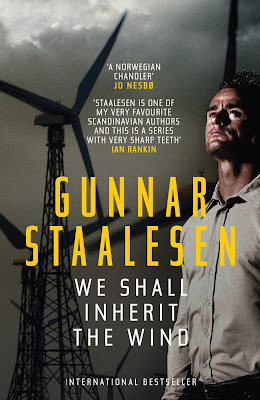 He blames himself, we know that; rewinding a week takes us back to the beginning of a tangled train of events - the disappearance of Mons Maeland, owner of a real estate company with an interest in a plot of land on the remote island of Brennøy. This plot, previously of little value, is now the proposed site for a new wind-farm. As Varg digs beneath the surface of the case, he uncovers a seething, squirming morass of deception: bitter family feuds, warring environmental factions, religious fanaticism, corporate in-fighting and the still unexplained disappearance of Maeland's first wife Lea. What he doesn't yet realise is that his pursuit of the truth will put his own girlfriend at risk. 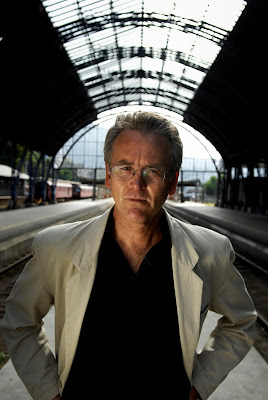 Staalesen's writing - fluently translated by Don Bartlett - is assured, as might be expected of the man known as one of the fathers of Nordic Noir. Such particular care is taken in the pinpointing of place, it's all the more surprising that Brennøy in Gulen is a fictional location. There's a satisfying quality of observation in the details, entirely befitting a private eye - like the way Varg notices 'the pewter candle-holder shaped like a viking ship with a half-burnt candle inside, probably a present from such close friends that it would have been embarrassing not to display it.'

Most of all, Varg Veum leaps living and breathing from the page as an intriguing man whose company you enjoy. Staalesen is equally confident with his other characters; many have appeared in earlier books but if, like me, you're new to the series then there's enough backstory to prevent you from feeling adrift.The measured pace and sharp, suspenseful plotting - a heady mix of murder, betrayal and revenge - draw you in. There are twists, turns and red herrings aplenty; sometimes, it's sensational but Staalesen ensures it never feels gratuitous. Love mingles with lust and, woven throughout the narrative, Varg's relationship with Karin - his despair at what he's brought her to - brings a poignant thread of humanity to the fray.

We Shall Inherit The Wind is translated by Don Bartlett and published by Orenda Books. Thanks to Karen at Orenda for my review copy.

Posted by Claire Thinking at 00:23

Email ThisBlogThis!Share to TwitterShare to FacebookShare to Pinterest
Labels: Don Bartlett, Gunnar Staalesen, Orenda Books, We Shall Inherit The Wind