Theatre Review: A Girl is a Half-Formed Thing at Tobacco Factory Theatres, Bristol 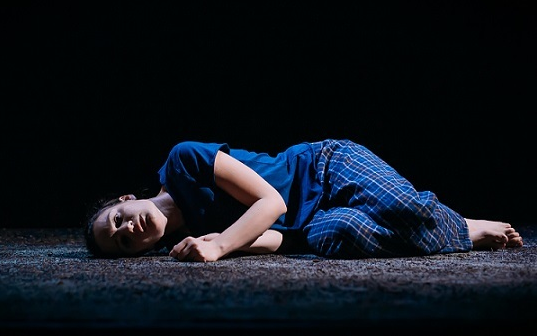 If you’ve read Eimear McBride’s 2014 Baileys Prize-winning novel, A Girl is a Half-Formed Thing, you’ll know you’re not in for an easy time in watching Corn Exchange Ireland’s stage production. In fact, you may still be recovering from the emotional devastation this book has wrought upon you. I know I am.

Yet I’m also feeling protective of the echoes this raw, harrowing, turbulent story has in my memory. Can Annie Ryan’s adaptation do McBride’s startlingly original and poetic prose justice? How can it reach, in the same incisively probing way, inside this solitary Irish girl’s troubled mind?

The answer is that it does so with astounding ferocity. If the book is all about the brave, staccato tumult of words, then this production is about their performance. Alone on stage, playing our unnamed protagonist, words pour out of Aoife Duffin like a swollen river in torrent. Her coming-of-age tale encompasses cancer, abandonment, Catholicism, deprivation, child abuse, rape, promiscuity, death and suicide. “In the stitches of her skin she’ll wear your say”; with visceral conviction Duffin inhabits them all as her own.

Ryan’s direction allows for no distraction; with the barest of lighting, sound and set design, Duffin’s vulnerable yet commanding portrayal brings out the tenderness, too. Abandoned before her birth by their father, this becomes an elegy for her brain-damaged older brother: “Thinking I think of you and me. Our empty spaces where fathers should be.” In every other relationship - mother, uncle, grandfather, school friends and strangers - our protagonist is used, abused, abandoned or accused; her brother remains the single, familiar beacon in her life.

Duffin is phenomenal; in navigating the darkest of material, she is its saviour. Baring her soul in an uninterrupted, exhausting 90 minutes, she recreates all the story’s other characters and interacts with them by making only the most miniscule of adjustments in naturalistic movement and characterisation. An occasional, sparse lightning rod of humour is welcome – forward rolls in a skirt in front of her grandfather, her mother’s moral outrage - allowing the rhythm of more bitter blows to have their impact, time and time again.

Despite the simplicity of the set there is a great sense of place; the mournful bleakness of the Irish rain, the thick, ankle-clagging mud and curtain-twitching intensity of life in a small rural community. In the hands of Ryan and Duffin, the novel becomes a soliloquy, as though it were always destined for the stage. Shocking to those in the hushed audience who haven’t yet read the novel; for those who have, devastating all over again.

Posted by Claire Thinking at 14:46