I expected more of a reaction the first time I hit her. She just lay on the floor holding her jaw. Staring at me. Silent. She didn't even seem to be surprised.

Quite an opening paragraph. And having grabbed your attention, Liz Nugent's debut novel Unravelling Oliver doesn't let go for a second. There's never any question who did it - the puzzle is why. 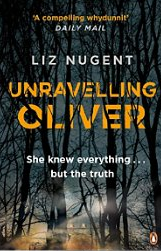 Oliver and Alice have an apparently happy marriage. He's a successful author of children's books and she's his illustrator. But there are clues early on (apart from that opening paragraph, of course) that all is not well.


I had always been fond of her in my way. She was a marvellous cook, for example, after all the gourmet cuisine courses I made sure she attended. Also, she could be very athletic in bed, which was nice.

Not exactly a meeting of souls, this marriage then. Oliver's is the ice-cold voice of detachment, the potential serial killer with more than one secret waiting in the wings. Something tells you he hasn't had a happy, conventional childhood - a suspicion which hardens into fact as his story unfolds.

After Oliver's opening chapter the viewpoint shifts - amongst others to Alice's childhood sweetheart Barney, Oliver's university friend Michael and Véronique, owner of the chateau where events occurred to change the course of so many lives.The narrative skirts in ever decreasing circles, with each testimony offering a different insight that closes ever more tightly in on the truth, before returning to Oliver. The only person conspicuous by her absence is Alice - and she no longer has a voice.

Unlike many multiple viewpoint narratives, where some characters are more authentic than others, Nugent is skilled in capturing each of these voices - so that they feel distinctly different and believable. It's possible to empathise with them all - even Oliver - because each has their own backstory and, as they fit another piece into the jigsaw, the reader must decide upon their reliability (or otherwise) as narrators. And pick the threads of fact from the protective cloak which each character may be putting on the past - unravelling the twists and turns which have you guessing right up to the satisfying conclusion.

I've heard this novel - like so many others - referred to as the next Gone Girl, but if - like me - you disliked Gillian Flynn's bestseller then don't be put off. With Gone Girl, I objected to the way I was being manipulated as a reader, neither did I find its tone nor characters credible. Unravelling Oliver is of a different order altogether.

Liz Nugent has worked in Irish film, theatre and television for most of her adult life and it's easy to imagine this tense and thrilling debut transferring to the screen. At only just over 200 pages it's possible to read Unravelling Oliver in just one or two sessions and be warned, once you begin, you'll probably feel compelled to do so.

Thanks to Penguin for my review copy. Unravelling Oliver is now available in paperback here. Photo of Liz Nugent by Ronan Lang.
Posted by Claire Thinking at 14:57