My reading of the classics has been decidedly patchy over the years. I hated everything we studied in English at school on principle - even novels I've later come to adore like Jane Eyre. Essay writing was always a chore so, despite having otherwise loved books, I gave up on taking literature post-16. Talk about shooting yourself in the foot - seems I was intent on blasting a double-barrelled shotgun at mine.

These days I'm trying to make up for my wilderness years, as well as weaning myself off a complete diet of new books, which I tend to read and review for this blog. So here are three recent reads: I became intrigued by the writing of this internationally acclaimed Nigerian author after discovering its influence on Chimamanda Ngozi Adichie. The opening line of her first novel Purple Hibiscus is a direct reference:

Things started to fall apart at home when my brother Jaja did not go to communion...

I also like the way Achebe and Adichie nestle together on the bookshelf: 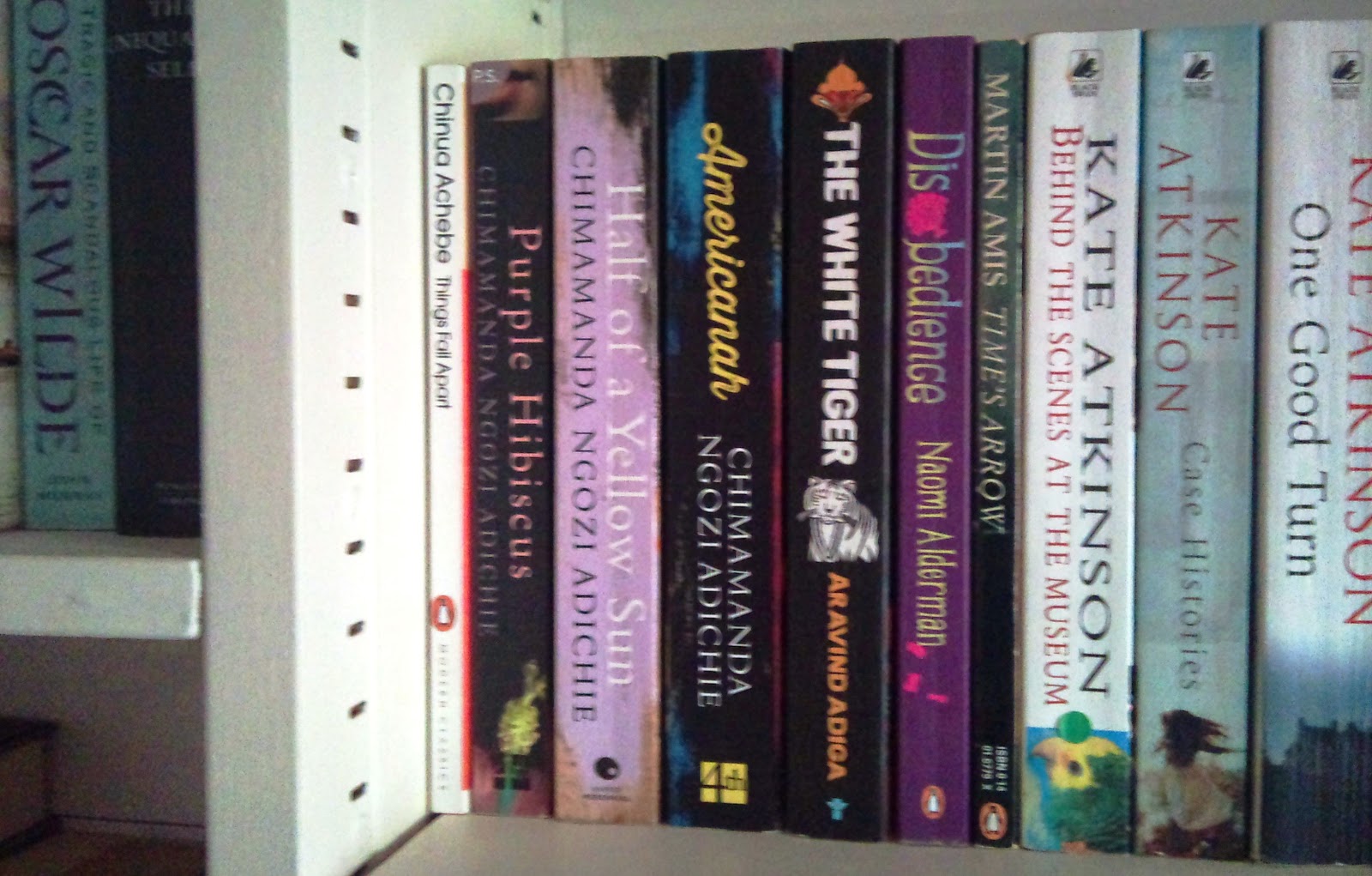 In Things Fall Apart, Okonkwo is an important man in the village of Umuofia, a wrestler and warrior of great esteem. He has three wives, many children and a plentiful supply of yams in his barn. In this patriarchal farming community, life is physically demanding and a successful harvest, the bridge between life and death, is at the mercy of the elements. There's a strict hierarchy to respect, gods to honour and customs to be obeyed. Often they are brutal; twins are considered evil and left to die in the forest and Okonkwo participates in the killing of a boy he has virtually adopted as a son, in order to appease the Oracle. But things really begin to fall apart when Okwonko offends the gods and is banished from his home. Upon his return, he finds that white men have arrived, threatening to overturn life as he knows it.

Traditional Nigerian village existence is challenged by the arrival of colonial power in the guise of Christian missionaries and a white civil governor. Things Fall Apart is the first in a trilogy of works about the changes wrought in this community. I was absorbed by the unstinting power and directness of Achebe's writing and will be reading more.

Of Mice and Men by John Steinbeck

Having loved and cried over The Grapes of Wrath, I'd been intending to read Of Mice and Men for a while. It was this book's recent 'banning' from the English syllabus which made me pick it up, interested to find out why it had been studied by a phenomenal 90% of GCSE students in England. George and Lennie travel together in search of work on the ranches of California during the Great Depression. George, small and quick-witted, looks out for Lennie, a gentle giant of limited mental capacity who doesn't know his own strength. The duo are migrants but dream of a better life where they own their own land and keep rabbits for Lennie to stroke.

Existence on their latest ranch is fraught with danger and, despite being a hard worker, Lennie is ill-equipped for it; there are threatening moments as the boss's son Curley craves a fight, while his new wife is busy craving the attention of every man she happens across. George and Lennie's dream comes so close they can almost reach out and touch it, but tragedy is foreshadowed in the fate of animals be they mice, old mutts or newborn puppies. Foolishly George leaves Lennie on the ranch for an evening while he goes to town with some of the other hands, with farther-reaching repercussions than even he could have imagined.

Steinbeck's writing is as unflinching and atmospheric as ever, but I was startled that such a brief novella, more of a snapshot than a fully developed masterpiece, could have become the book of choice for GCSE. Maybe brevity is the point; the story can easily be absorbed in one sitting and regurgitated without too many problems. But surely it's an issue that there's only one stereotypical female character in the book, even though she has a suggestion of greater depths which could be explored in a longer novel. Does any of this make Of Mice and Men easier to discuss in answering a GCSE question? I have a feeling it might not.

The Master and Margarita by Mikhail Bulgakov

Entering the surreal world of 1930s Moscow when the Devil comes calling was my favourite of these three reads. He appears in the city one evening with a fast-talking black cat named Behometh and a motley collection of other associates, plus a set of bizarre predictions which unnervingly come true. Wreaking havoc all around him, it seems the citizens of Moscow are powerless in his grasp. Meanwhile, Pontius Pilate is in Jerusalem, overseeing the trial of Yeshua, a story at the heart of the Master's novel. Margarita, the Master's lover, believes passionately in his work, but given the opportunity by the Devil to become a witch with supernatural powers, she takes it and presides over his midnight ball.

This is a multi-layered satire of good and evil filled with allusion to Stalin's repressive regime and many of the absurdities it created. It is full of cultural and literary references, but tellingly, the devil has all the best lines; 'Manuscripts don't burn' he proclaims as he produces the novel the Master earlier threw on the fire.

Posted by Claire Thinking at 22:57